While we were hut hopping through the Whanganui National Park we saw so many wild goats. They thrive in the bush down there and DOC has a hard time trying to keep the numbers down. I hear of people who are employed to go out several months at a time into the bush to cull them.

Jerusalem shot two goats during the first two days of tramping. The first a young one which we ate and enjoyed very much in a curry. The second goat was a black nanny goat the boys shot at Trains Hut. While I was busy painting they went of to get us some meat. I heard several shots and they eventually came back with the kill. 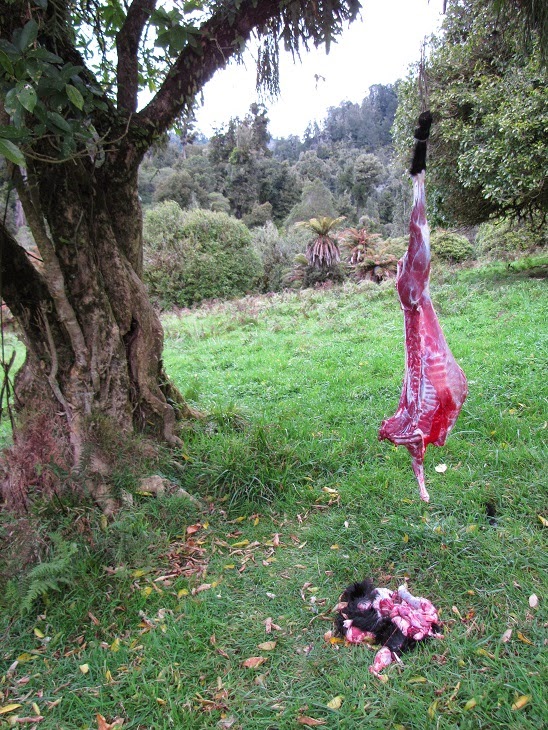 To make a long story short, they had stalked the goat, shot it, wounded it, they shot again, and it fell over and promptly disappeared. When they went over to investigate they saw it had fallen about 4m down into a ravine. They had a bit of a scramble around and down to retrieve the quarry.

They spent the rest of the day processing the meat. They cut it in strips and dried/smoked it in the chimney and around the stove. Jerusalem cooked up a whole lot in a stew for dinner which we all enjoyed very much. It was to be our last fresh meat for the rest of the eight days. 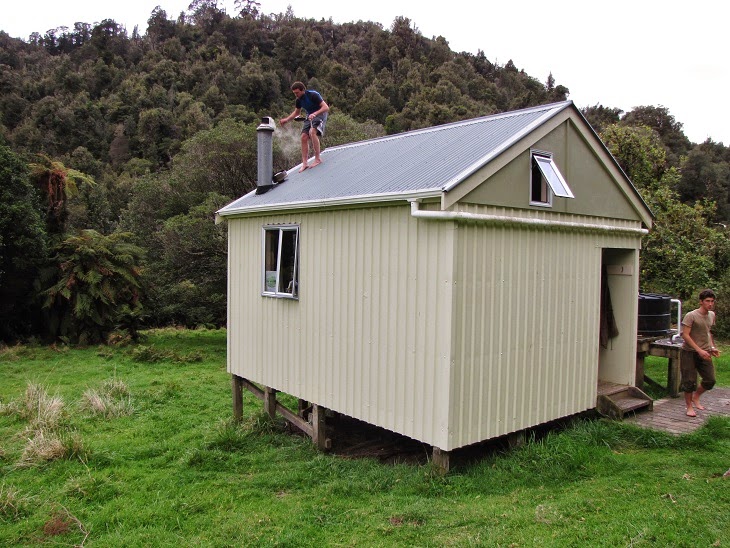 Next morning we packed up and began walking down the track, a few meters from the track we turn and actually read the signs that we had seen but not paid any attention to. It looked just like this one I took a photo of at another hut: 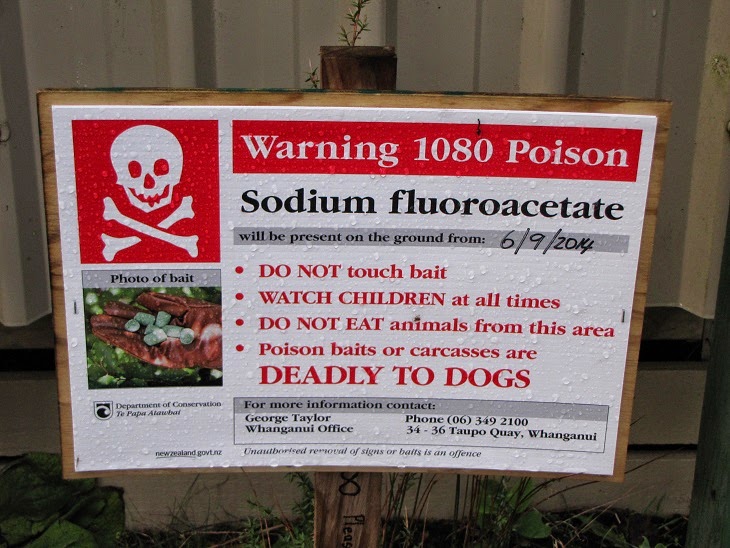 So basically we had just eaten a goat which was poisoned.  We had no idea how much a poisoned goat would affect us, but it was very likely it had eaten poison because as we walked on up the track we began to see a lot of 1080 bait all over the ground dropped by air. We thought it was better to be safe than sorry and threw out all the dried meat we had. Trains Hut was on the boarder of the poisoned area so the first young goat we ate would not have been poisoned having been shot well out of the poisoned area.

Jerusalem texted an uncle who told us that we would have to eat quite a lot of poisoned goat meat to kill us and we hadn't eaten enough to even get sick. We were glad to hear that, but the text caused a lot of rumors to get spread about among our friends and when we got home everyone thought we had been sick and dying!

I know that possums and other pests need to be controlled, but I don't like 1080 at all. It is deadly and kills everything, I don't know enough about it to comment, but seeing the deadly 1080 bait all throughout the forest floor and then seeing animals lying dead along the path just makes me feel sick. Surely there must be a better way of pest control without having to endanger all the animal life in the bush.

P.S. I have since done research. 1080 kills the massive amounts of pests that we don't want in our bush that's good it helps bird population, dramatically in some cases. But I still don't like the idea of poison in our native forests causing thousands of animals to die in agony native 'protected' wildlife and farm animals included. My personal opinion is that people spend more energy finding a good pest control alternative to 1080 than arguing. Please don't get too fired up in the comments this is supposed to be a nice happy art blog...!

If you are interested in the issue visit these opposing sites.
DOC  vs. The 1080haters