How Venison came on the Menu

We started walking at about 5:00 pm. It was late to begin what turned out to be a 6 hour walk, but when home is the next hut, it's either that or sleep in the car park. We walked out from Roger's Hut that morning and I stopped to finish my sketch of Skips hut on the way. 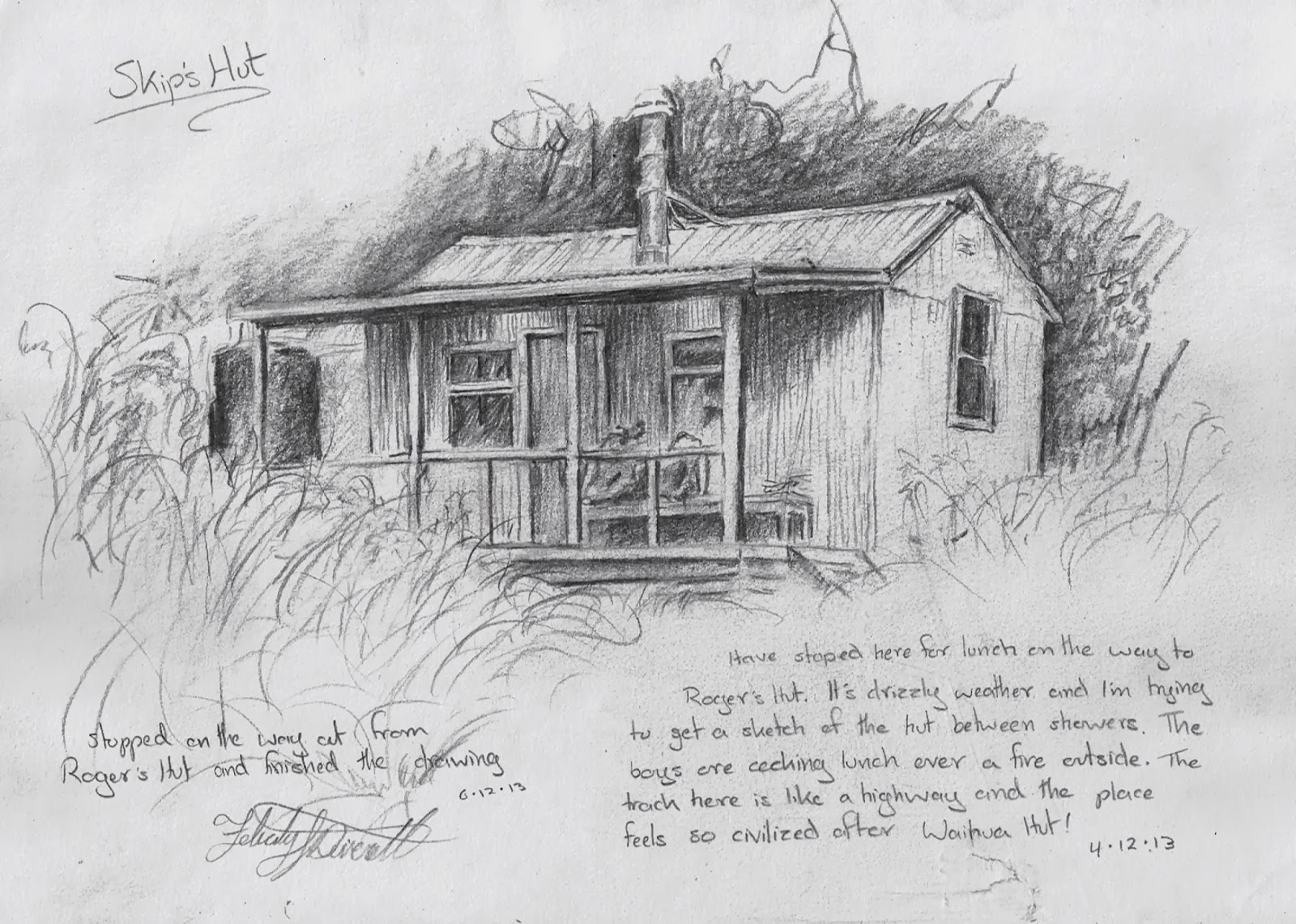 We had a good walk out to the car down the track like a highway, the track there is also a bike trail and so the going is pretty even. We got to the car and had then to find the beginning of the next hut track. There was no reception in the area and Mum was expecting to hear from us that day, so we stopped off at a house beside the road and were kindly allowed to borrow their phone. I called Mum to let her know not to worry about us if she didn't hear from us in the next two weeks as it was not likely we would be back into civilization before then. As it turned out we did because of my knee.

Half of the way to Te Totara hut was by a dirt road through private land. From the map we had hoped we could dive up it but when we got there it was obvious the Starlit would not make it up. Through numerous fords and deep ruts. So we walked the extra 2.5 hours to White's Clearing at the top. On the way I saw wild deer for the first time. I'd been looking out for deer during the whole trip. We don't have them wild up here in Northland so it was quite a novelty. We saw so many on the way up through the private land. There was a herd of hinds grazing on the slope opposite us, we counted about 30 of them and crept up close to watch them. We observed them for a long time with Caleb itching to get his gun out, but we were still on private land so he couldn't do that. Then the wind changed and they smelt us, saw us and then disappeared in a trice.

As soon as we got onto DOC land and on the river path downstream to the hut Caleb got his gun out of his pack and walked ahead with all eyes and ears open. Here was the best chance he had to shoot a deer. The sun had gone down and the light was slowly fading. We walked on down the river crossing and recrossing it numerous times. My knee was beginning to trouble me, especially on the rough terrain of boulders and loose rocks, so I concentrated hard on the ground ahead. I remember thinking that if Caleb did shoot a deer I might be able to persuade the boys that we should stay an extra day at the hut. We would have enough food and my knee really didn't want to do any more walking-- my thoughts were blasted out of my mind and I looked up startled at the sudden explosion. I saw Caleb dart away from the track down to the river. 'I got im!' he was saying excitedly as we followed him to the river edge. He let off two more shots in the excitement somewhere over the river. Then he dumped his pack and waded across with his axe. I never saw the deer until he pulled it out from behind a bank where it had fallen. 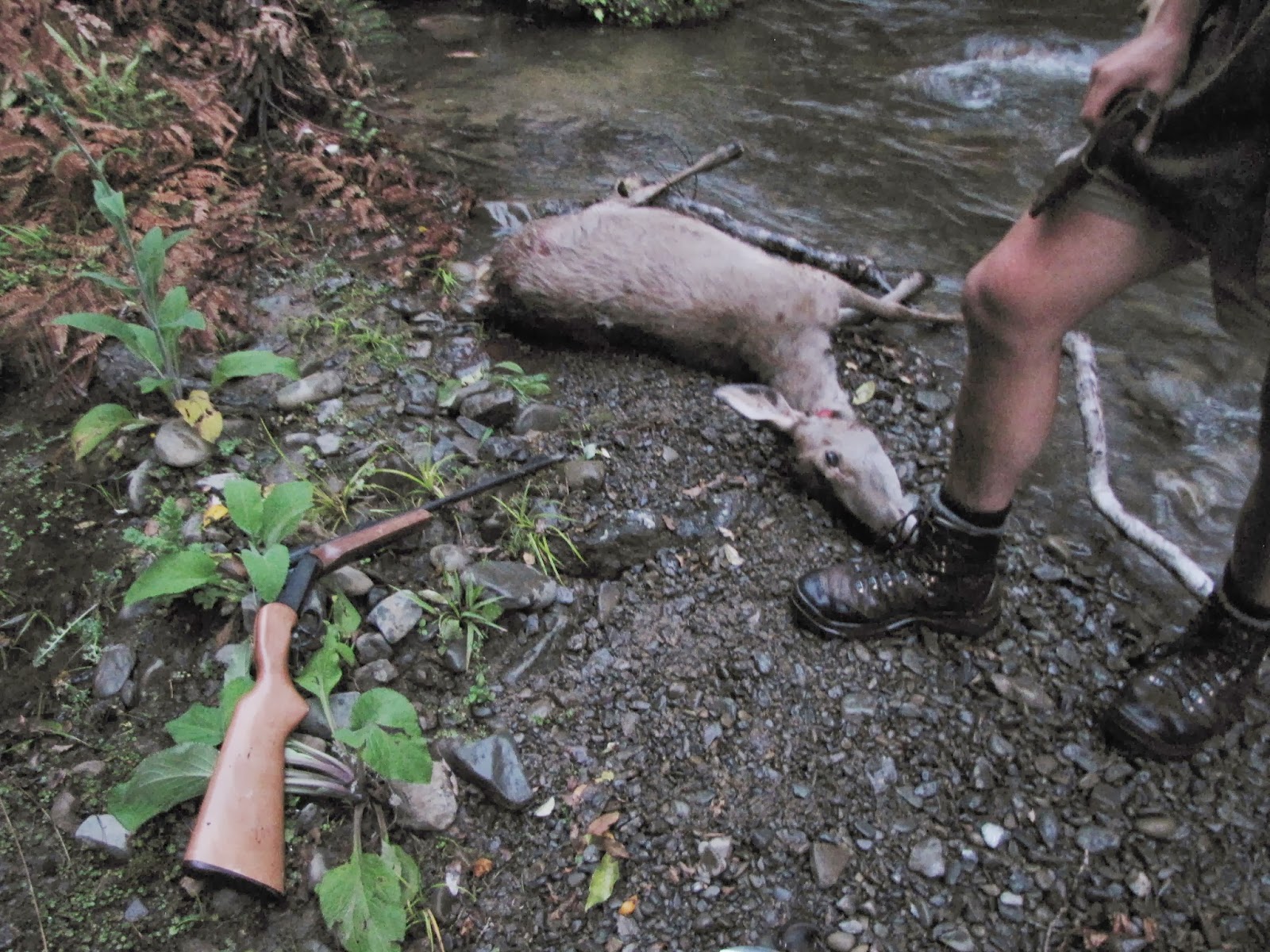 It was just a young thing, and I felt sad to see it lying there dead when it had been so alive moments before. It was still warm when I stroked it's face and allowed myself a quiet moments grief. But Caleb was jubilant. Nothing could have pleased him more; his first deer! And I was happy for him too, and for the fresh meat that it meant.

We were still a couple hours walk from the hut and was getting dark very fast. We set off in high spirits, which sank steadily during the next several hours. Caleb carried the deer on top of his already heavy pack until the path began to go up, and he could barely move from the weight of it. Then Thomas helped and carried half of it and from then on it was an awful struggle through the dark trying to keep to the track by spotting the orange triangles with the torches. I don't think we could have kept to the track if it wasn't for the markers. And even with them we almost lost the track a few times and had to turn around and re-find it. But at last, at long last we came to the hut and crossed the river up to our waists and collapsed at the hut. It was 11:30. We didn't even have venison that night, but ate a quickly cooked up meal rice and tuna and fell asleep as we hit the bunks. 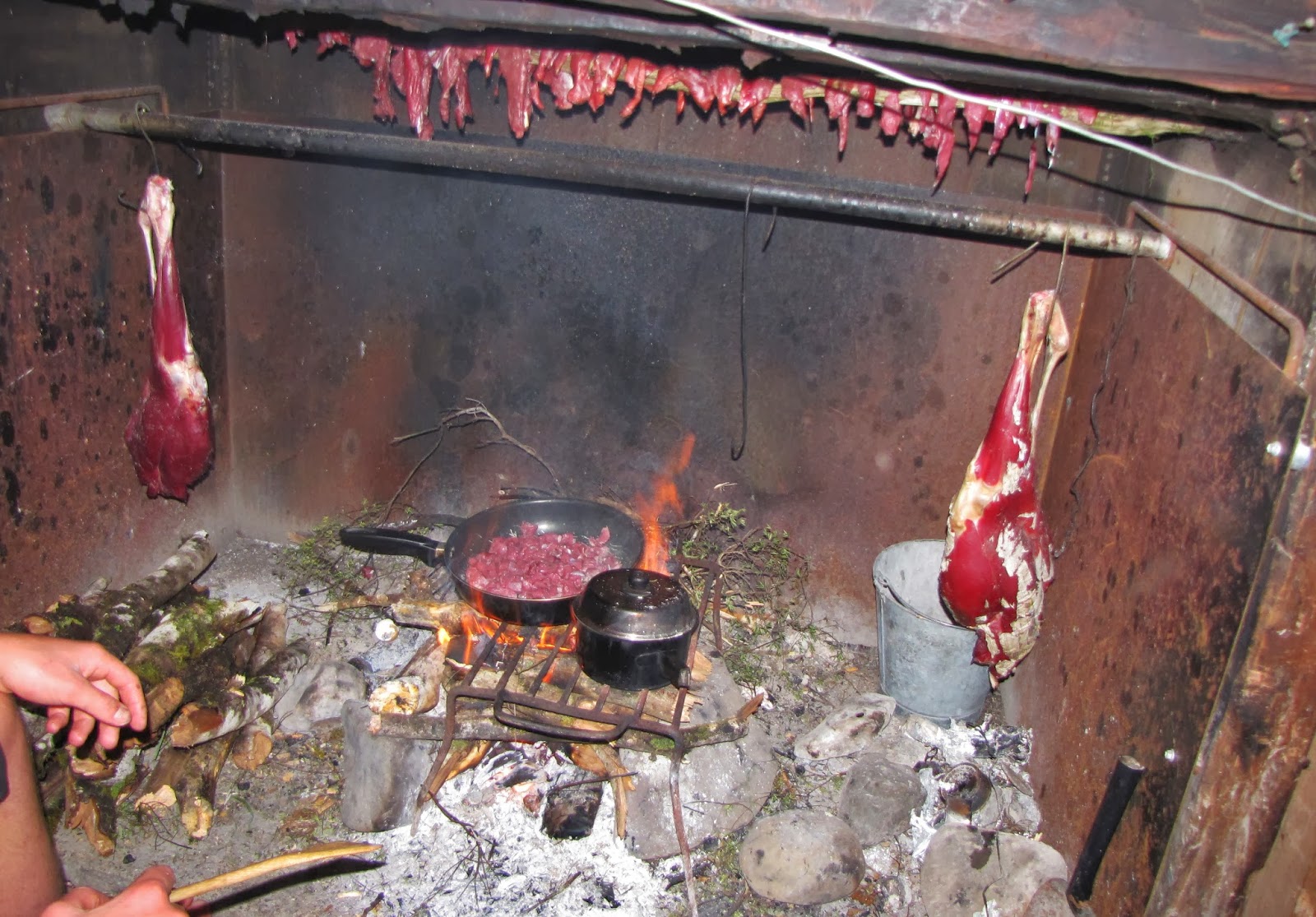 The next day looked like this: Legs of meat hanging either side of the fire getting smoked to keep the flies off. Strips of meat hanging over sticks to dry it out and keep. And meat in the frying pan to eat. We did stay an extra day at the hut and we ate a lot of venison, especially the boys, I was amazed at the quantities they were able to consume!

All the venison lasted us for the rest of the trip and we had dried meat left over. It saved a lot on the grocery bill! Hopefully we will have the same luck in our next hut hopping trip. This was one of the highlights of the trip which was well and truly earned!
Posted by Unknown at 12:22 PM