When you read this I will be making my way down south to Mt Ruapehu--to the snow!

It's something my friends and I have been talking about for awhile, and now we are going! We will be staying in one of the DOC huts on the foothills and have one pair of skis and a couple of toboggans. And are planning a good freeze! There will be eleven of us going in one big van taking a couple of days to travel down. I haven't been down south much and haven't seen much of New Zealand at all really having lived all my life in Northland, the winterless north.

Where we are staying is apparently near to Gollum's pool which was filmed for Lord of the Rings, so we'll have to have a look at that wont we!

I'm hoping to get a chance to draw the hut while we are there, and the neighbouring one which is just a short walk away. I also want to take the chance of doing some filming down there for my video promoting The Art of a Hut project. I'm working on setting up a pledge me account to raise money for the project.

I'll tell you all about the snow after I get back next Sunday. Hopefully we have lots of snow and beautiful weather and no earthquakes or volcanoes. After all it is an active volcano and one of the most dangerous places to be at the moment, according to my brother. Imagine us sliding down the while slopes of a beautiful mountain under sunny skies -- just like this: 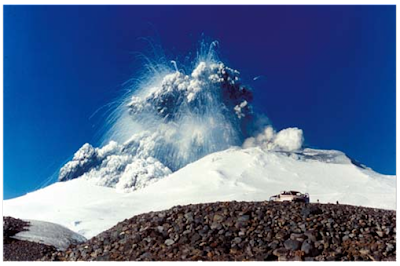