My life is one big holiday, they say!

Here are a few photos of my life since about a month ago when I last posted. The first half of November I was in Christchurch with Caleb who was on holiday from Uni. We went tramping out in the mountains in the Arthur's Pass area with Thomas and a couple of their friends. We hitched out to Arthur's Pass and spent three nights tramping on the west coast side. 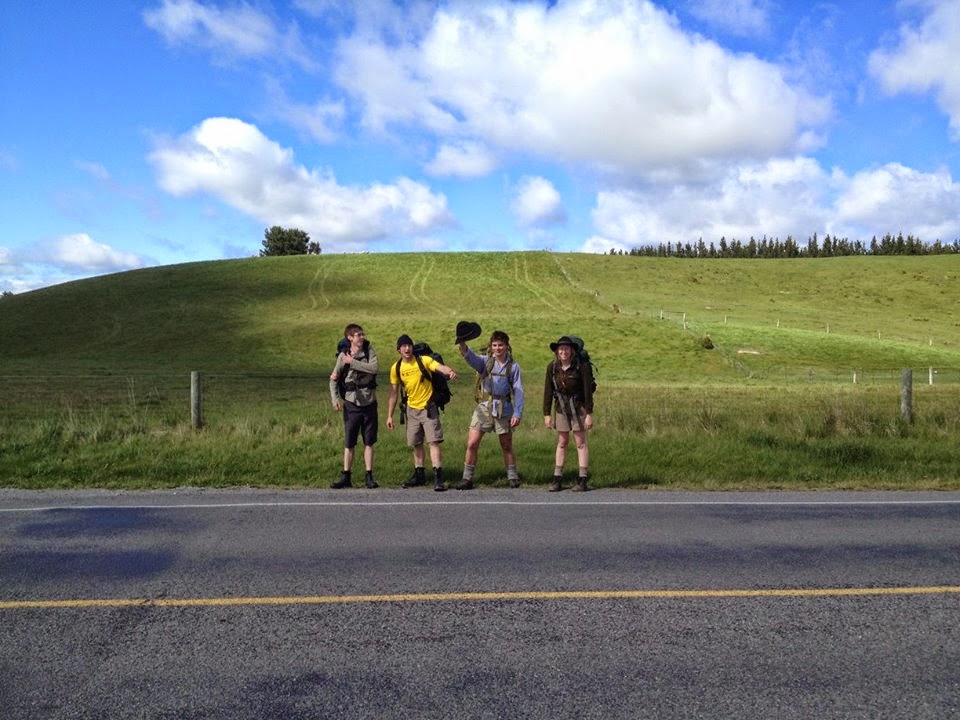 I've never been in mountains as big as this before and it was an amazing experience. The artist side of me worked hard to figure out those mountains. I'd seen a lot of paintings of mountains and they seemed to me to to be not quite right, no artist seemed to be able to capture the huge solidness of them, and then I saw the mountains for myself and I was amazed at how like those paintings they looked! They seem so airy and full of colour, the shadows of clouds constantly moving over them reminded me of water reflections and when the clouds came down low they were lost in a soft fog. I should love to go down there one day and spent a while in the mountains trying to capture in paint that sense of solidness and hugeness as well as that airy elusiveness. 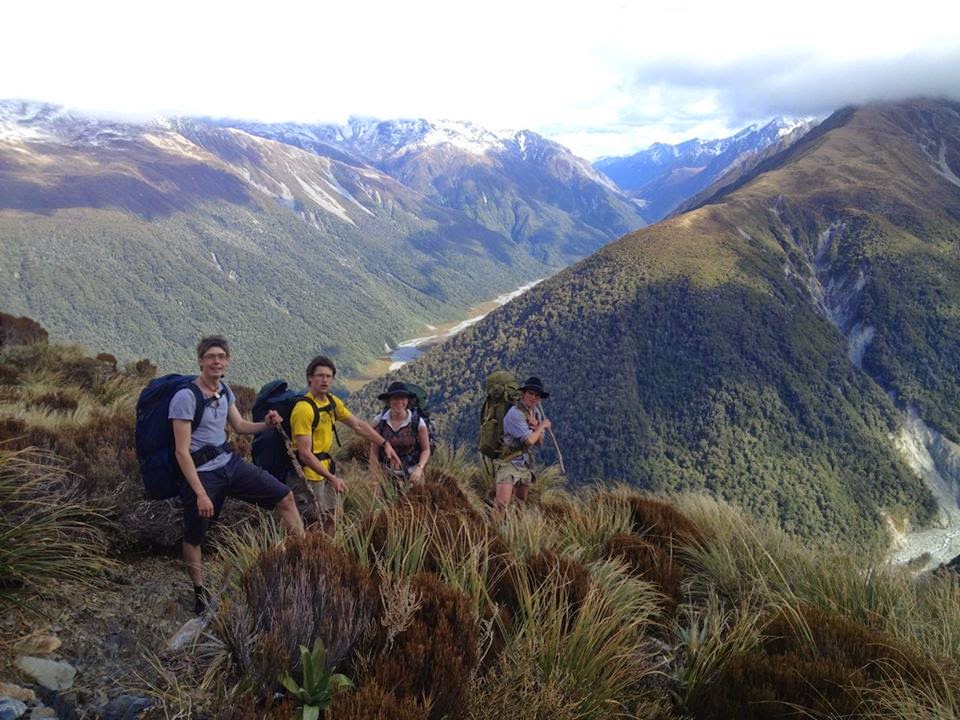 Almost at Carrol Hut, Arthur's Pass behind us. 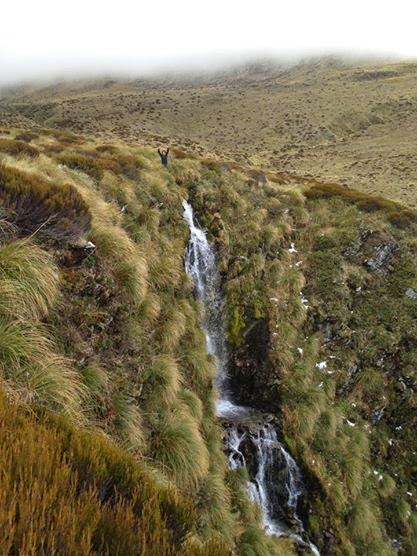 A waterfall in the stream which flowed past the hut. 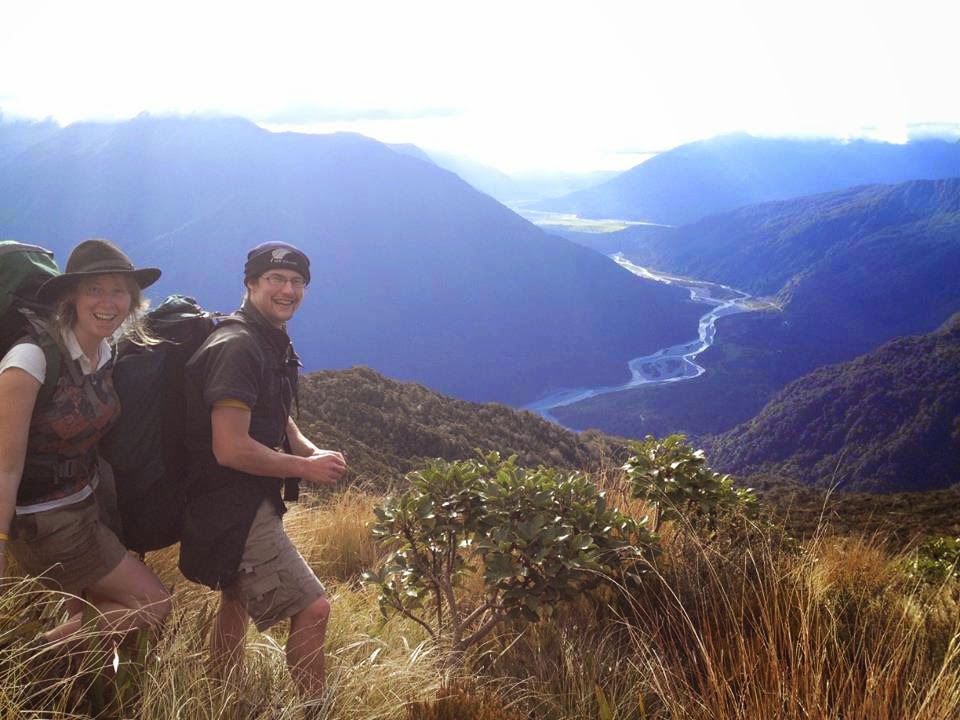 Thomas and me. The rivers down there are amazing, big and braided. 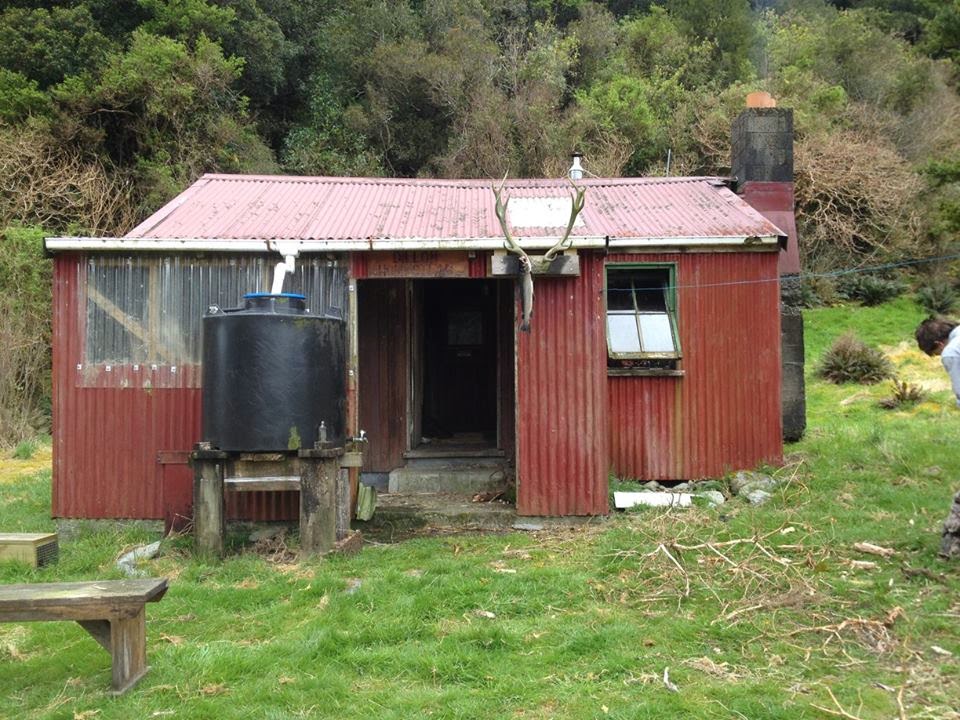 Dilon's Hut on the river flats which we enjoyed very much apart from the west coast sand flies. Caleb caught a nice big trout while the rest of us were still sleeping. Went for a walk up the river and had fun on the cable car. 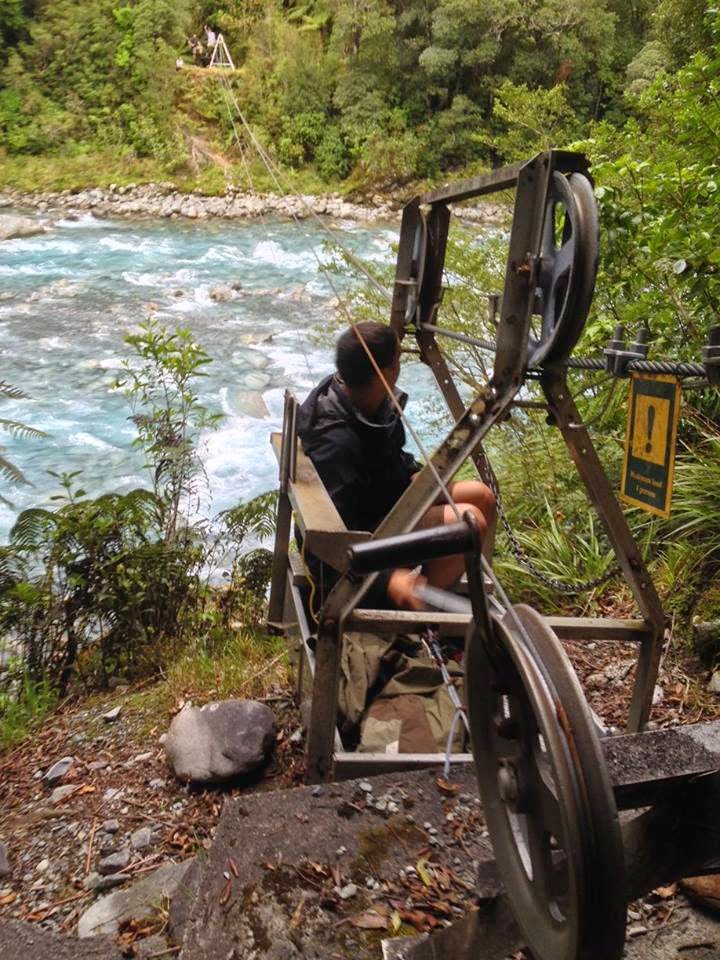 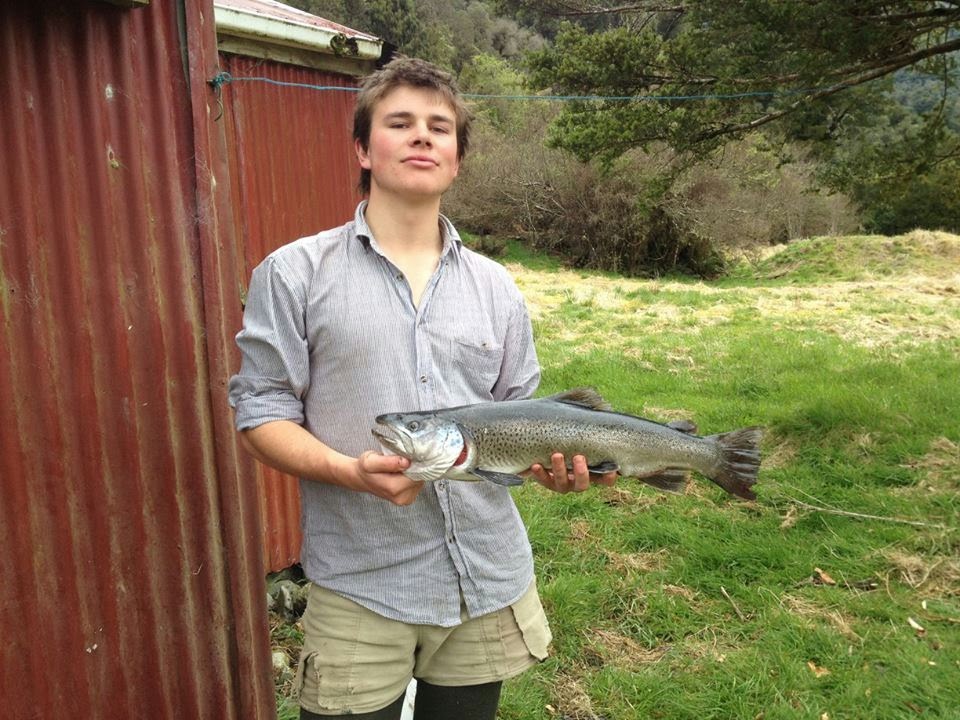 We walked out down the river and hitched back to Christchurch. Caleb and I waited a few hours in the misty rain and sand flies before we were picked up by a kindly Dutch couple touring in a campervan. Finally got back a few hours after the others and after walkinf for an hour from the edge of the city. Hitching remains unreliable...

The next day but one we were off again doing more exhausting stuff, this time mountain bike riding for two days with Caleb and Thomas. We rode from the Uni up and along the port hills and on to Banks Peninsula and Packhorse Hut. 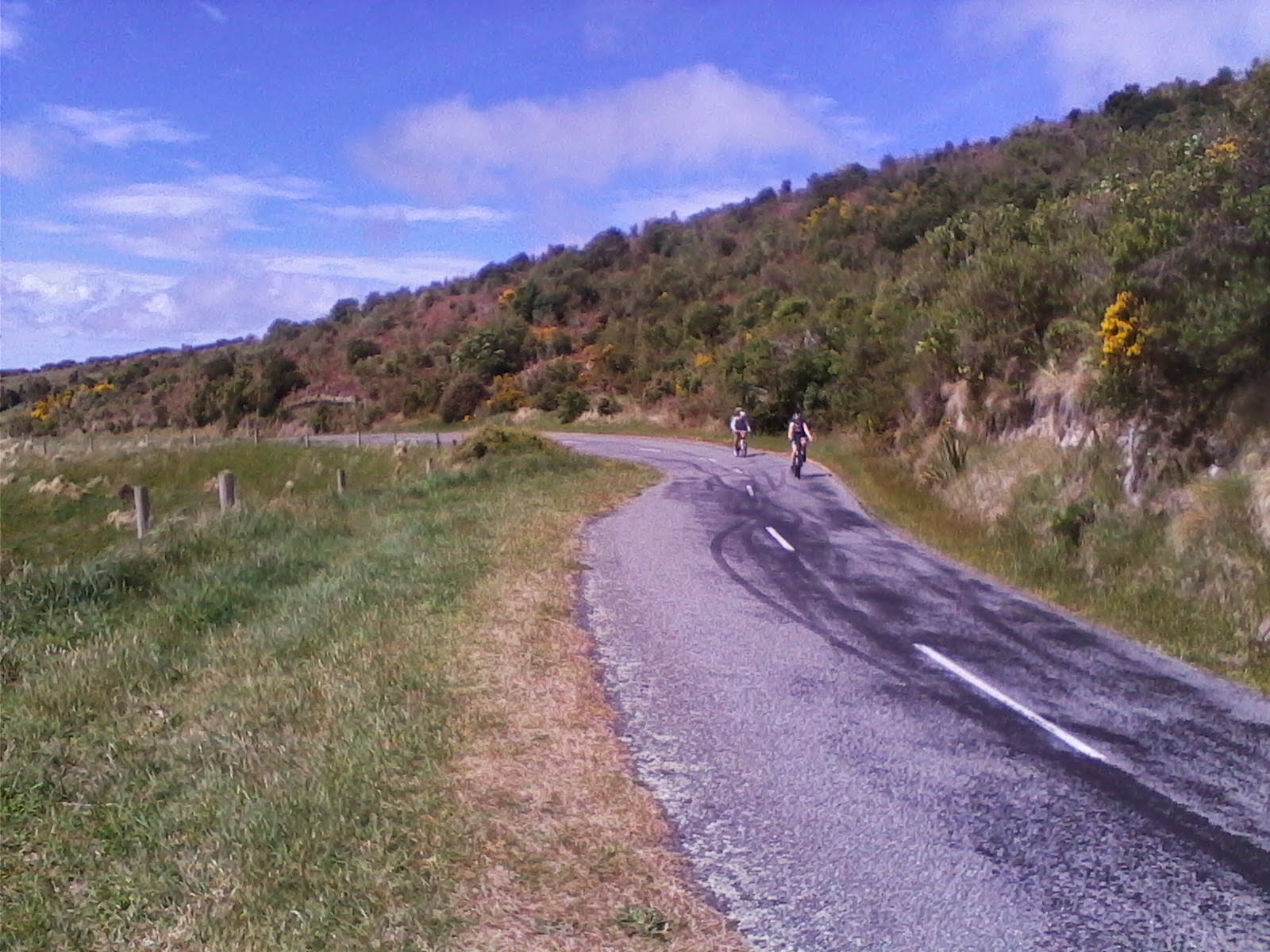 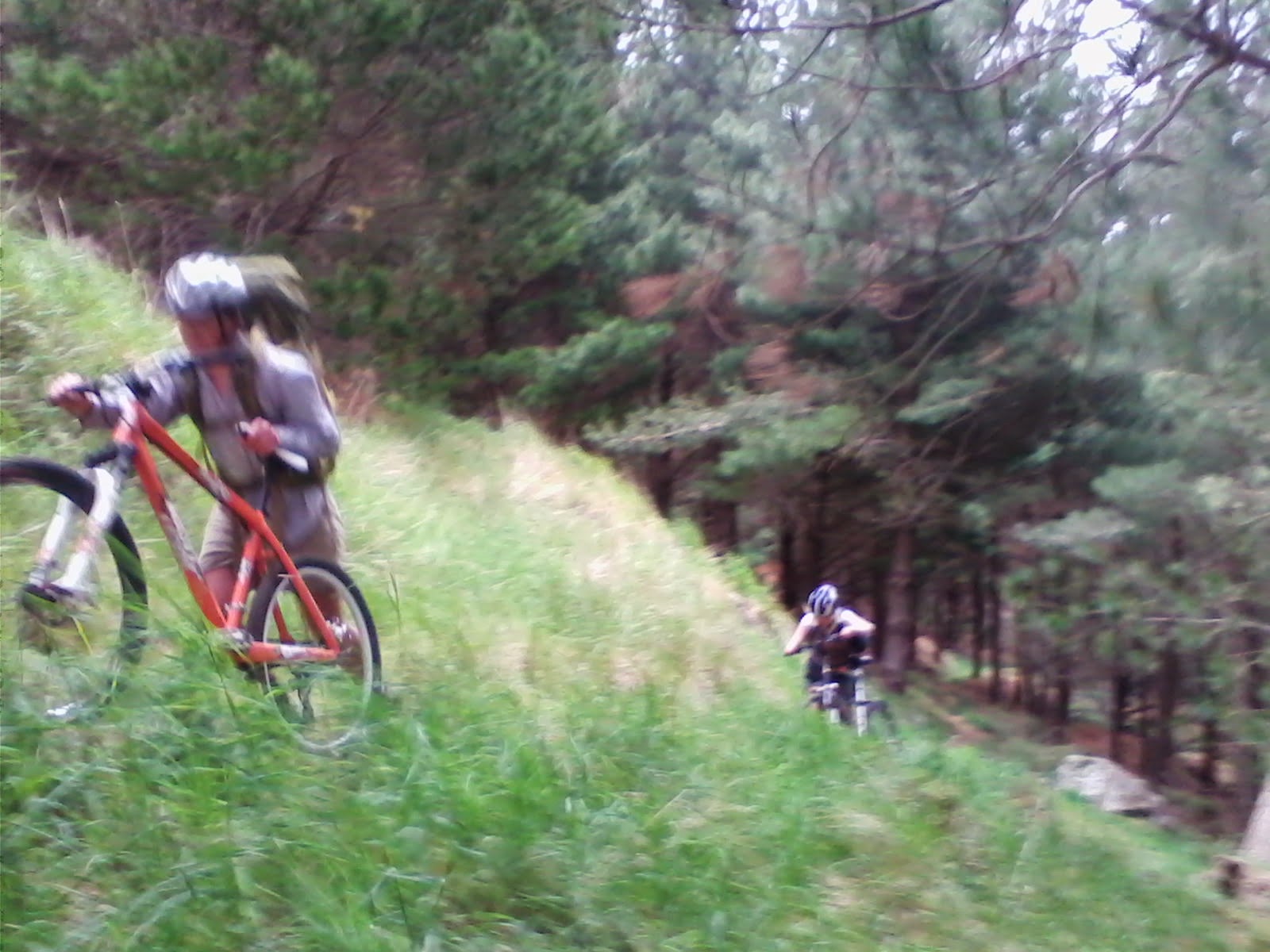 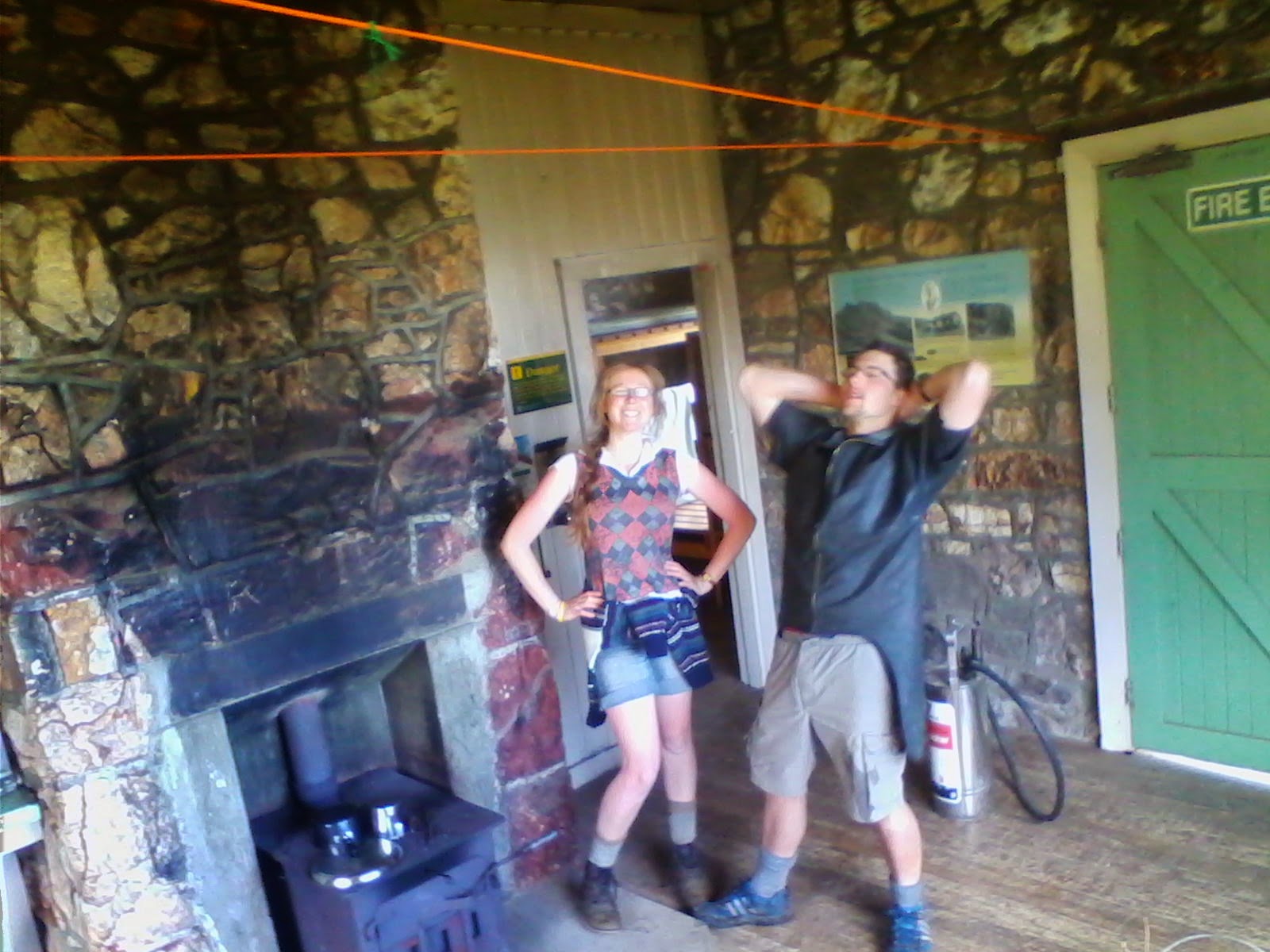 In packhorse hut, a pretty stone hut, where we stayed the night, in the morning a whole lot of day trampers turned up so we cleared up and spent most of the day carrying out bikes up and around something like a mountain before finally being able to bike down the steep farm road and fields on the other side. That was exhilarating and terrifying! Only one accident when Caleb's chain broke and he went flying and landed with his bike on top of him. 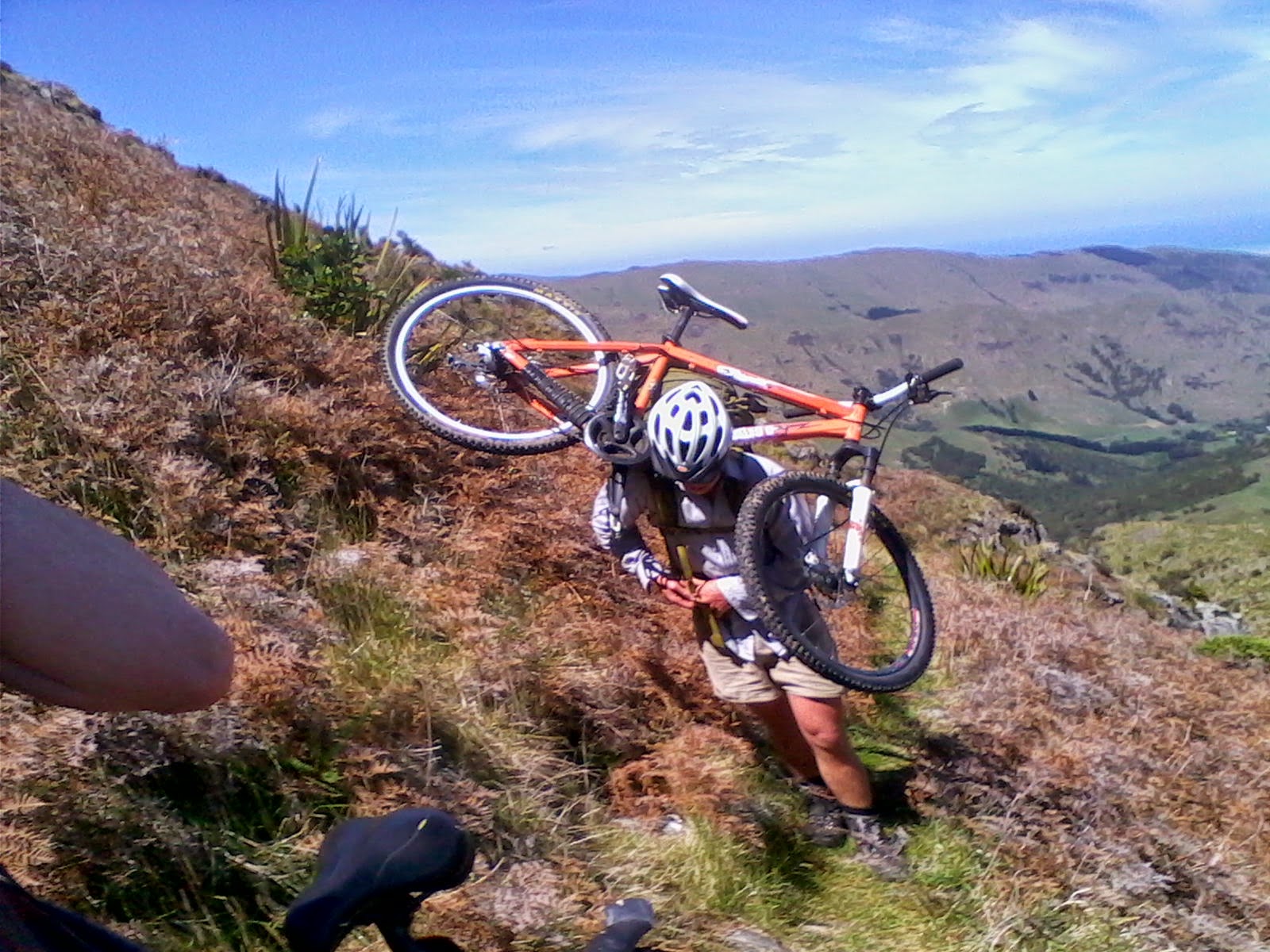 Well, I've been home for three weeks now and have been getting ready for another hut drawing trip for The Art of a Hut project, and have been doing a bit of painting and drawing for myself. 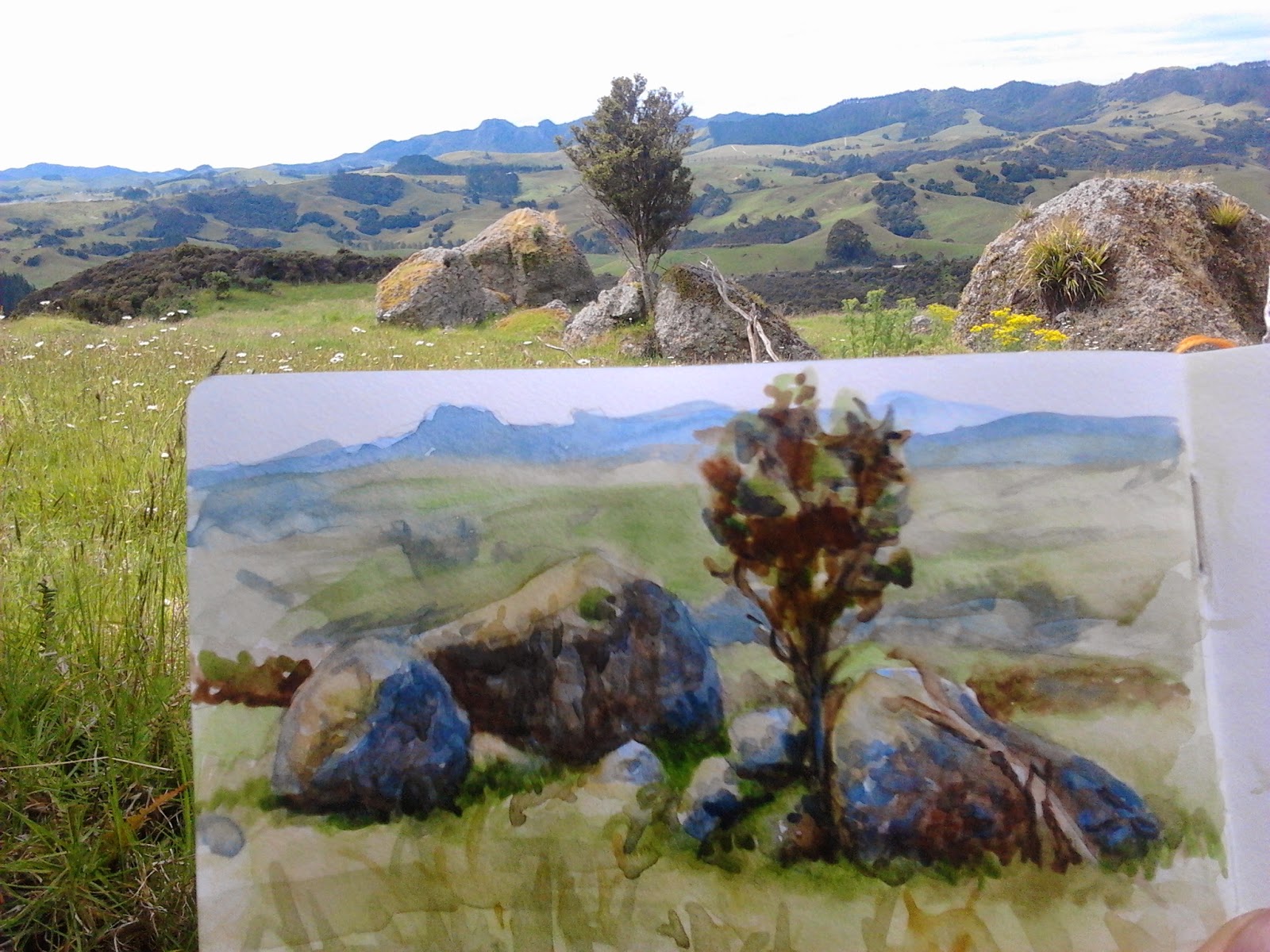 I drove out to Tarara one day last week to do some paintings of the huge boulders strewn around the foot of that big rock. But somehow I forgot my paintbrushes! I considered finger painting, but ended up just doing a watercolour sketch and hunting around for interesting compositions to paint another time. 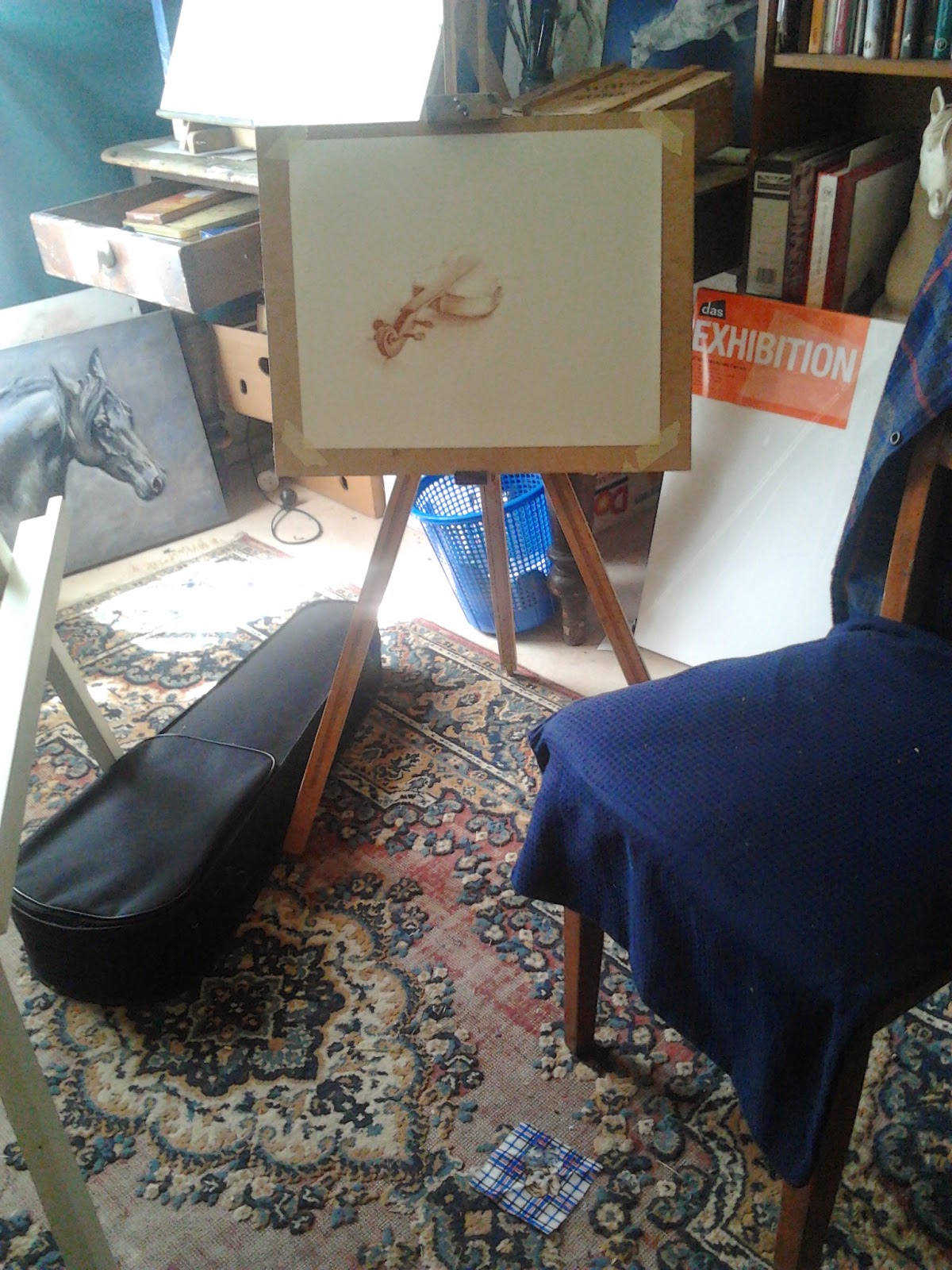 This is what has been going on in my studio this week. The violin is a ticklish thing to draw, get one line or curve wrong and it looks all off. 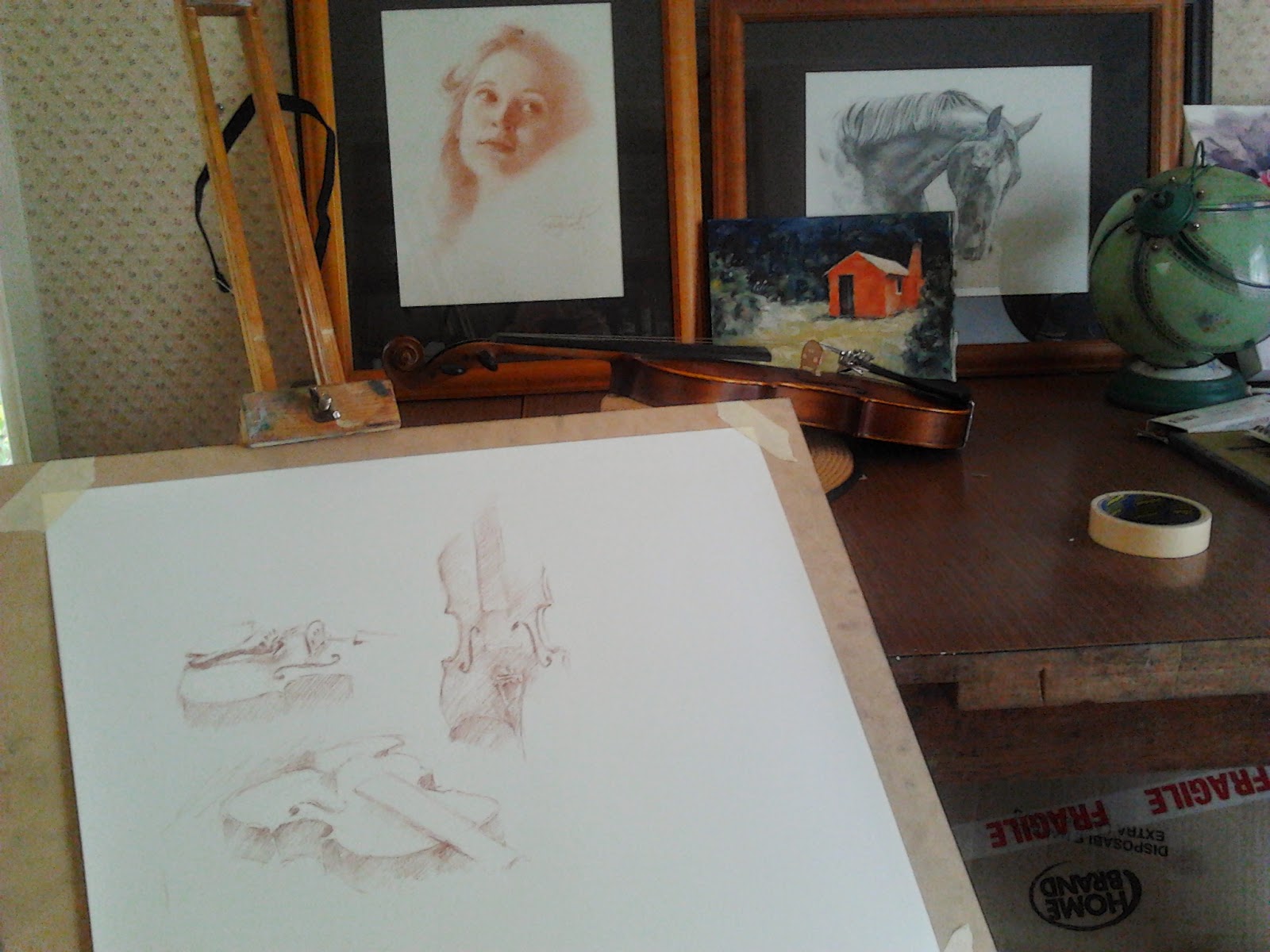 I ordered a whole lot of new business cards and they arrived in the mail the other day. They are nice and shiny and stiff, sorry about my blurry phone photo. 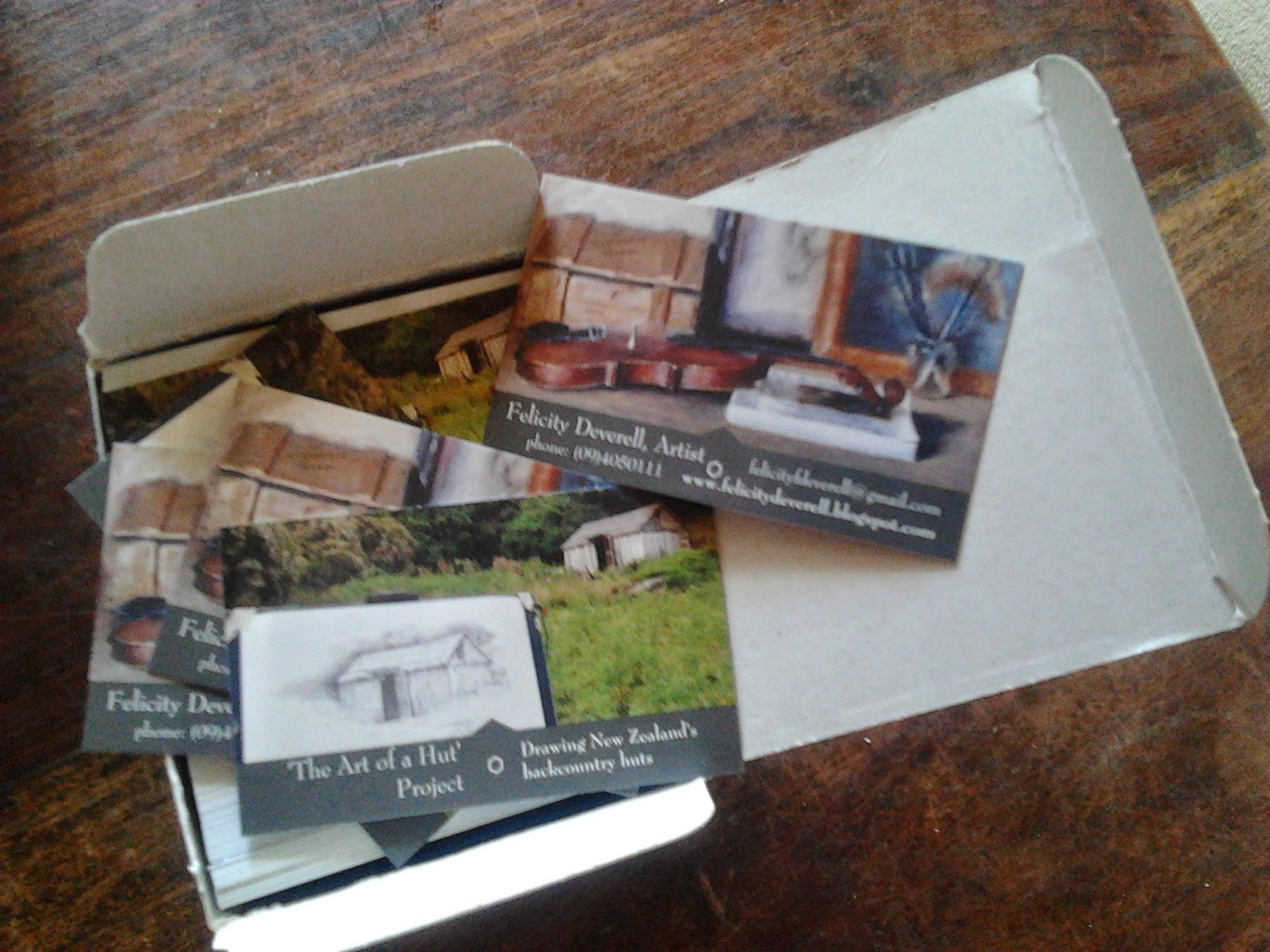 This weekend I'm leaving on another hut hop. This time in the Tararuas near Wellington. We will be spending two weeks in there, tramping two loops of seven nights each. I'm hoping to get some good drawings done I'm getting excited now and looking forwards to it. !!!!