At the beginning of July I went off on another hut drawing trip in the Ruahine Range. There were three of us, Caleb, my brother Nathaniel, and me. Nathaniel and I hitched and bussed down to Hawke's Bay where we met up with Caleb,  was on holiday from University, and headed out to the hills for a week. We stayed at six huts in all in as many nights and I managed to draw four and a half of them. The half being a quick sketch of the last hut where the weather was none too good and time running out to get out before the river rose too high. 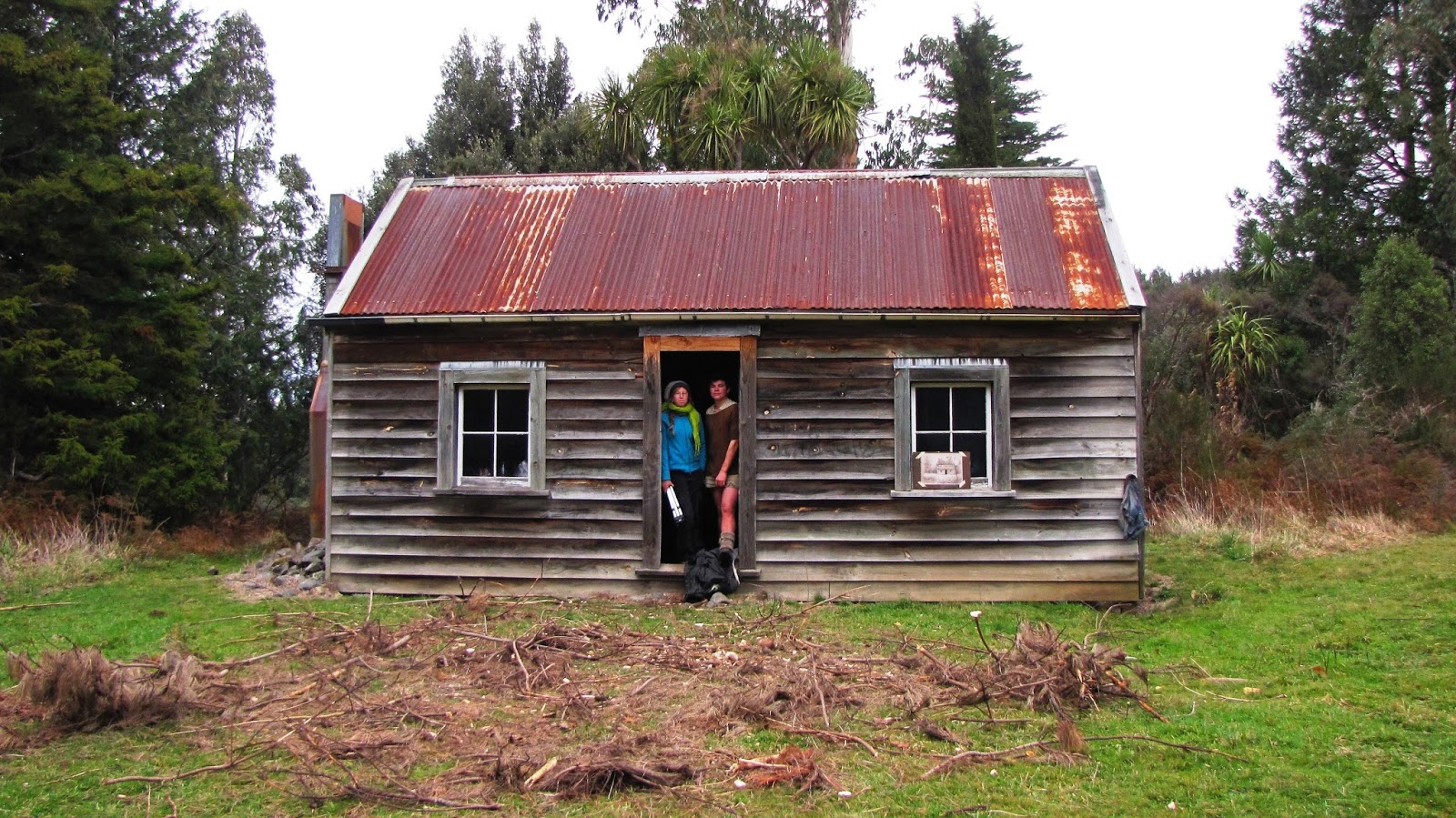 This is the first hut we tramped to. Ellis Hut, also known as Murderers Hut. It has an interesting history one story was of a convicted murderer being tracked down and captured in this hut. It wasn't the most comfortable hut to stay in during winter. The fire smoked as bad as the worst of them and one could see the light of day where the light of day should not be seen. So we had a smokey chilly night and woke up with headaches. But alive. And I never got cold! When I was working in the South Island a few months ago I invested in a good down sleeping bag. The brand is One Planet and sleeps in comfort down to -7. I have yet to feel the cold in it. 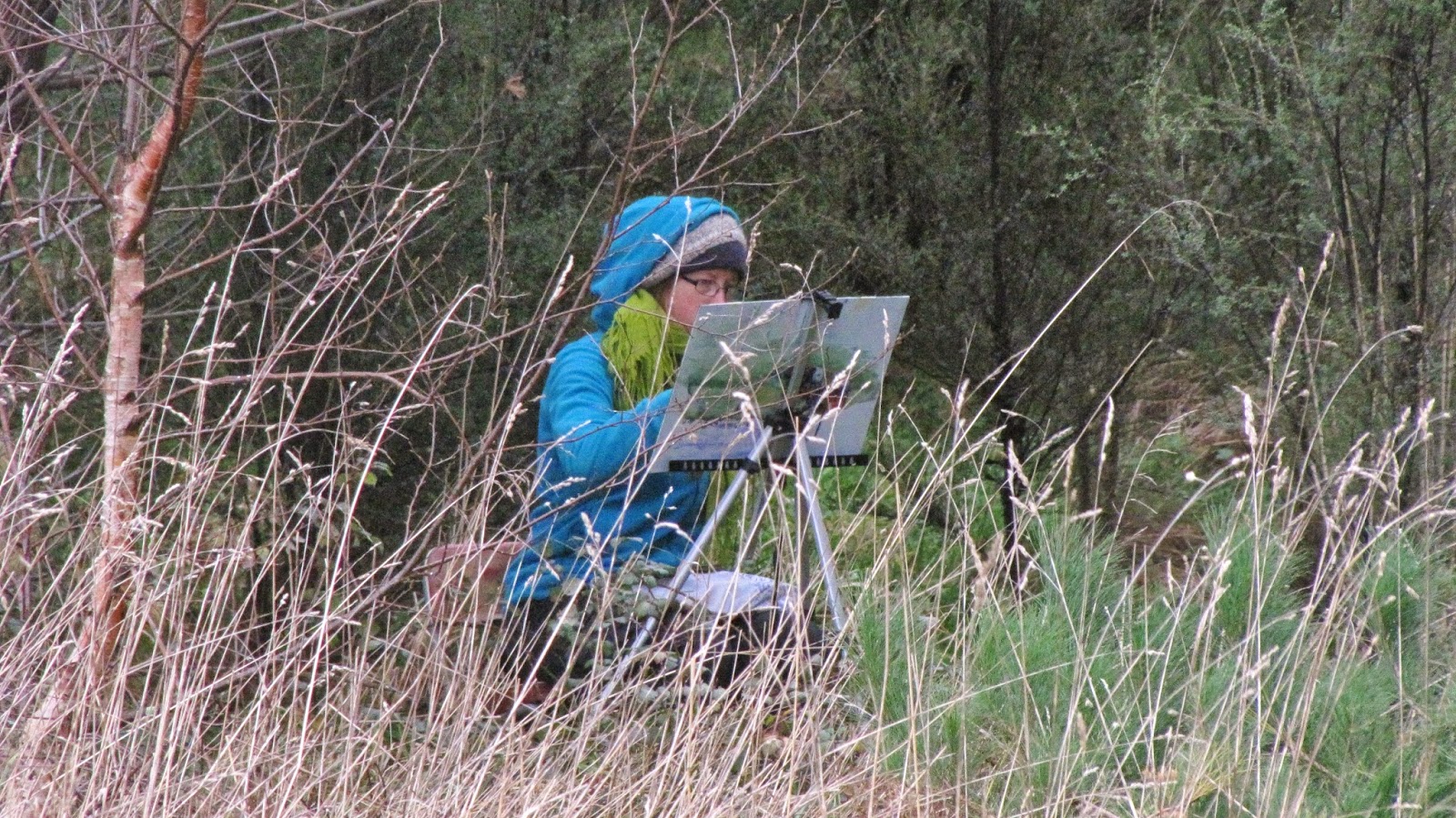 A typical lunch, though it's not always burnt and the sausages were a bonus. In the background you can see the rotten logs which the boys were pulling huhu grubs out of. They fried them up, about half a cup full and ate them with relish. I managed to down a few, and would have liked them only the thought and the sight was a bit much! They tasted like bits of fat, slightly nutty. 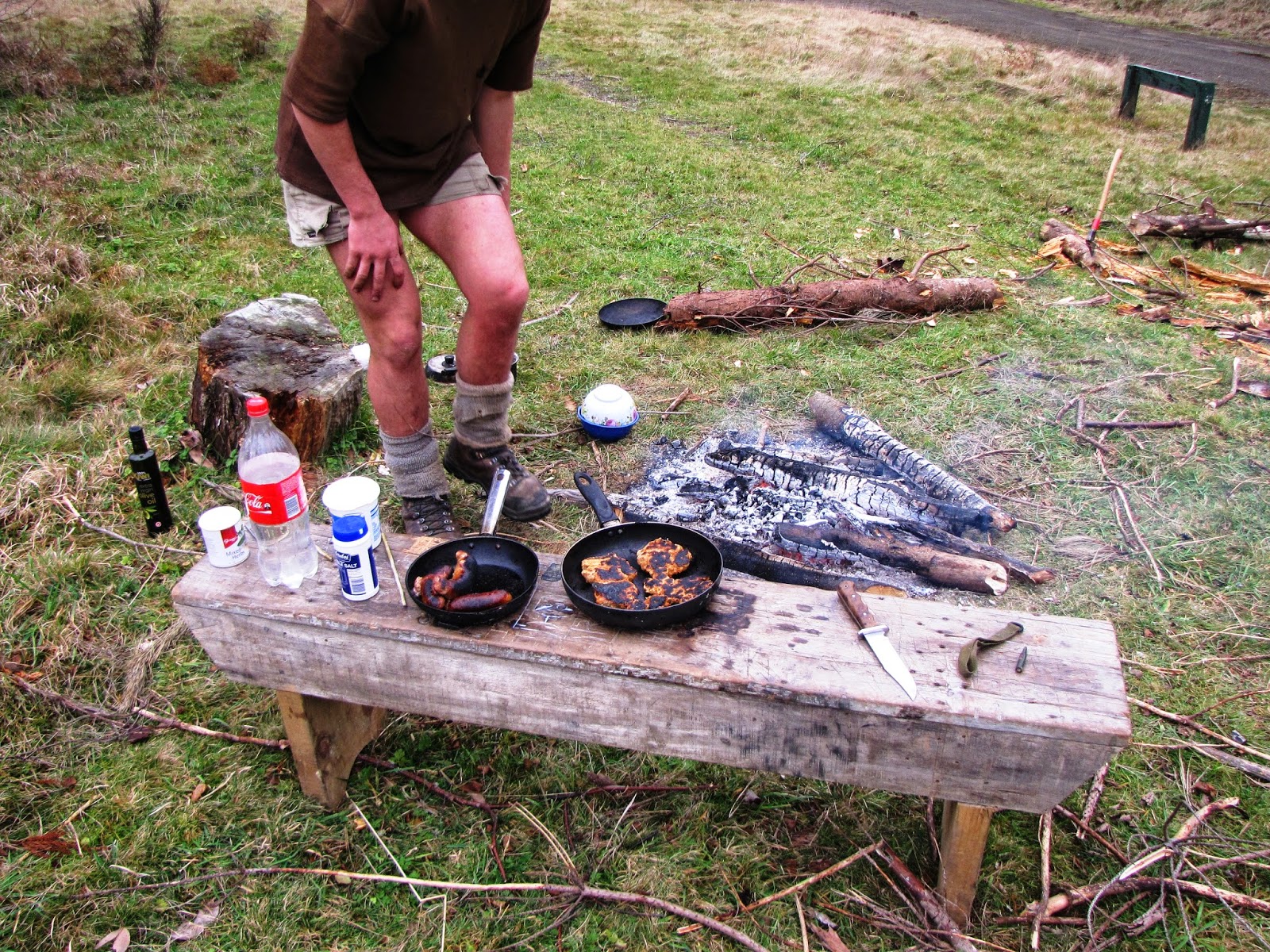 This is inside Poutaki Hut a less popular hut near Ellis hut. This hut is doomed not to be repaired again by DOC. Once it becomes too run down it will be pulled down. It's quite unfortunate as it was one of the nicest huts, quite cozy with a roaring stove called Little Dorrit. I did a painting of this hut, you can see it sitting in the window, drying. I used fake oil paint (water mixable) with no medium so it dried fast. The light changes so fast that it was quite a challenge, but it remained my favorite piece from that trip. 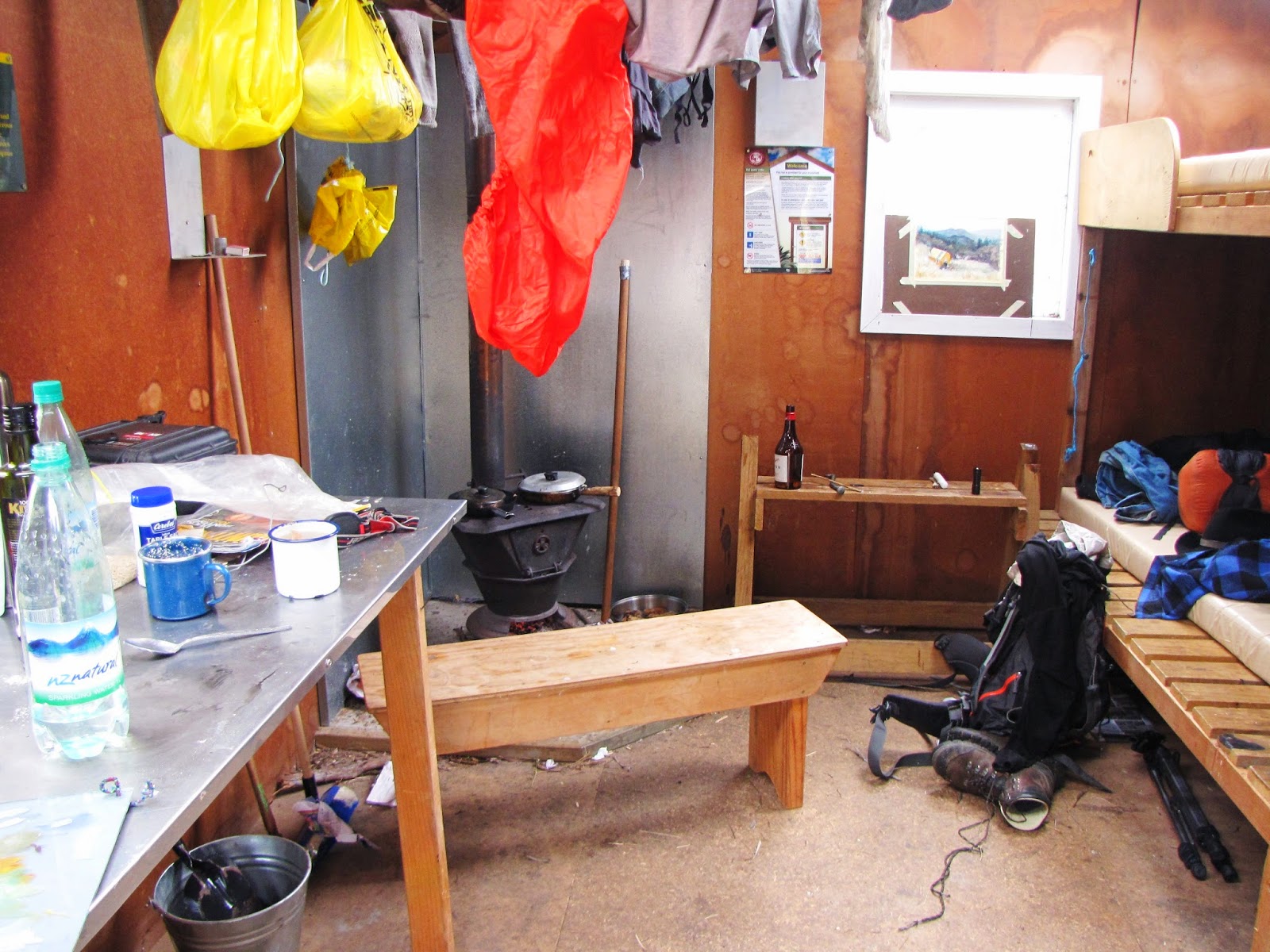 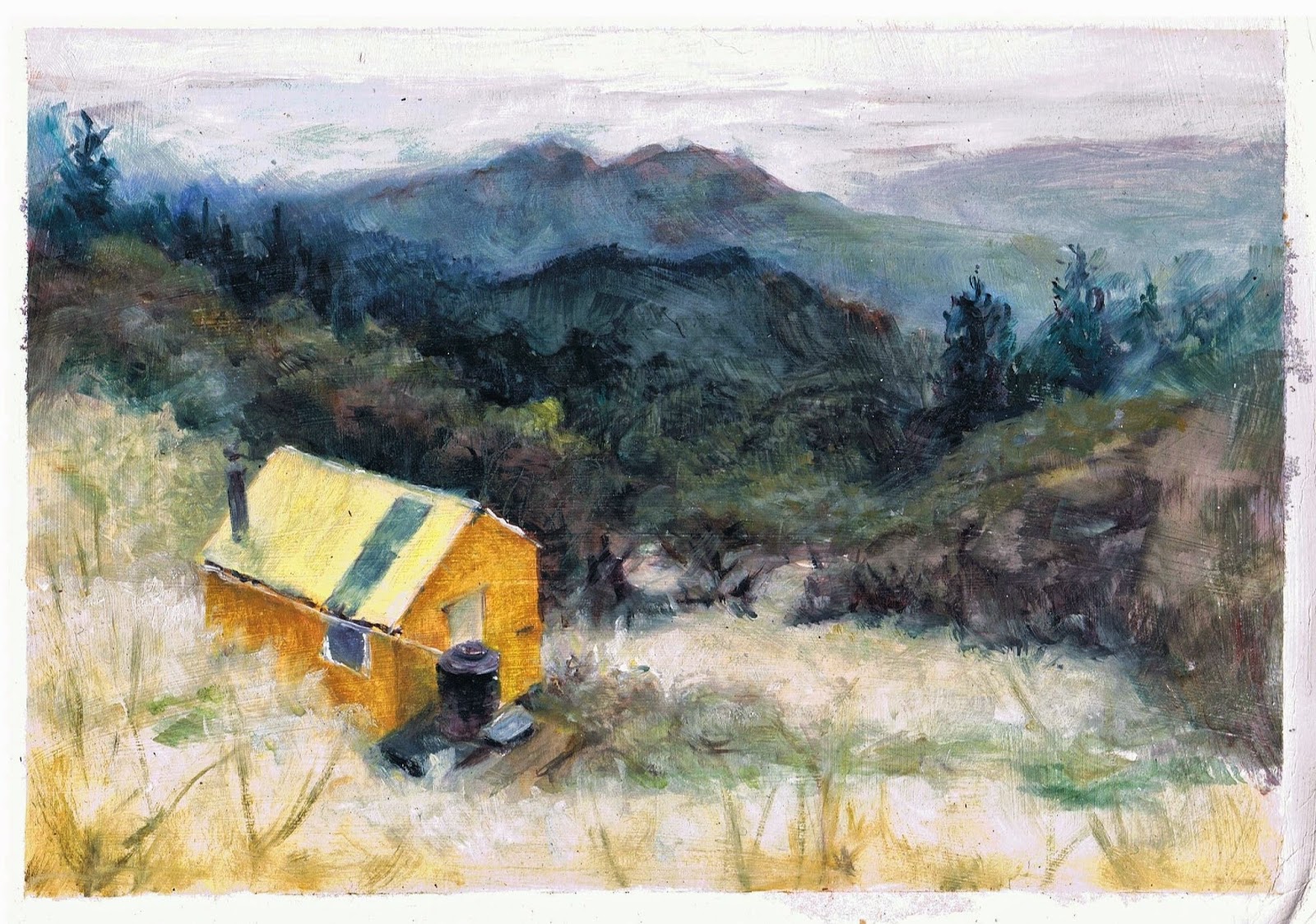 My painting of Poutaki Hut. I have another post here with more about this painting. 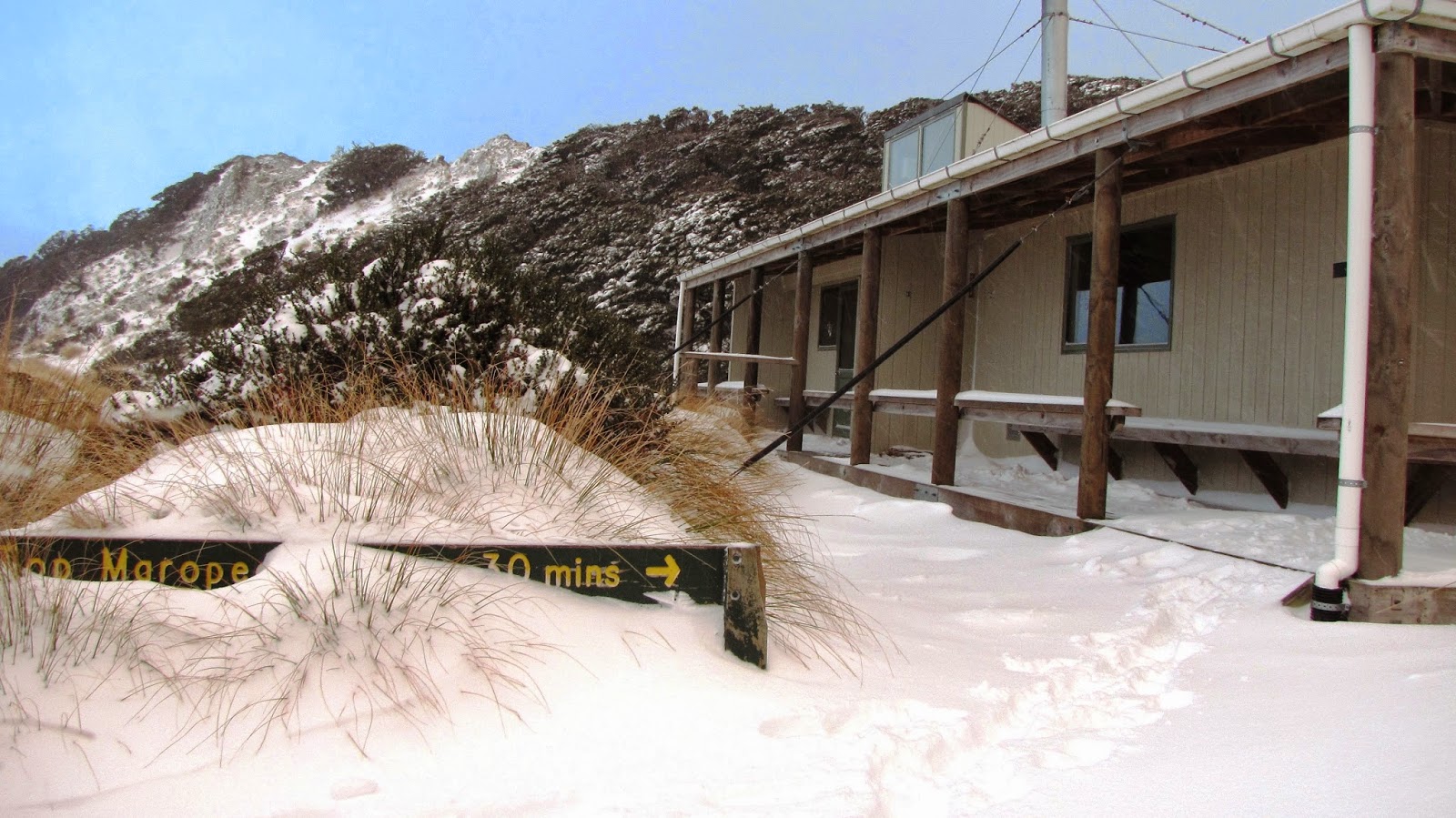 The third hut was the popular Sunrise hut. It is so popular that we met five people here (three separate parties) during a mid-winter Wednesday in a snowstorm. It began to snow while we were walking up early in the morning. We were excited with the first small flakes of snow, not knowing how much snow we would be seeing before the end of the week. At the hut it was very windy and snowed almost continually until the next morning when the sun came out again. 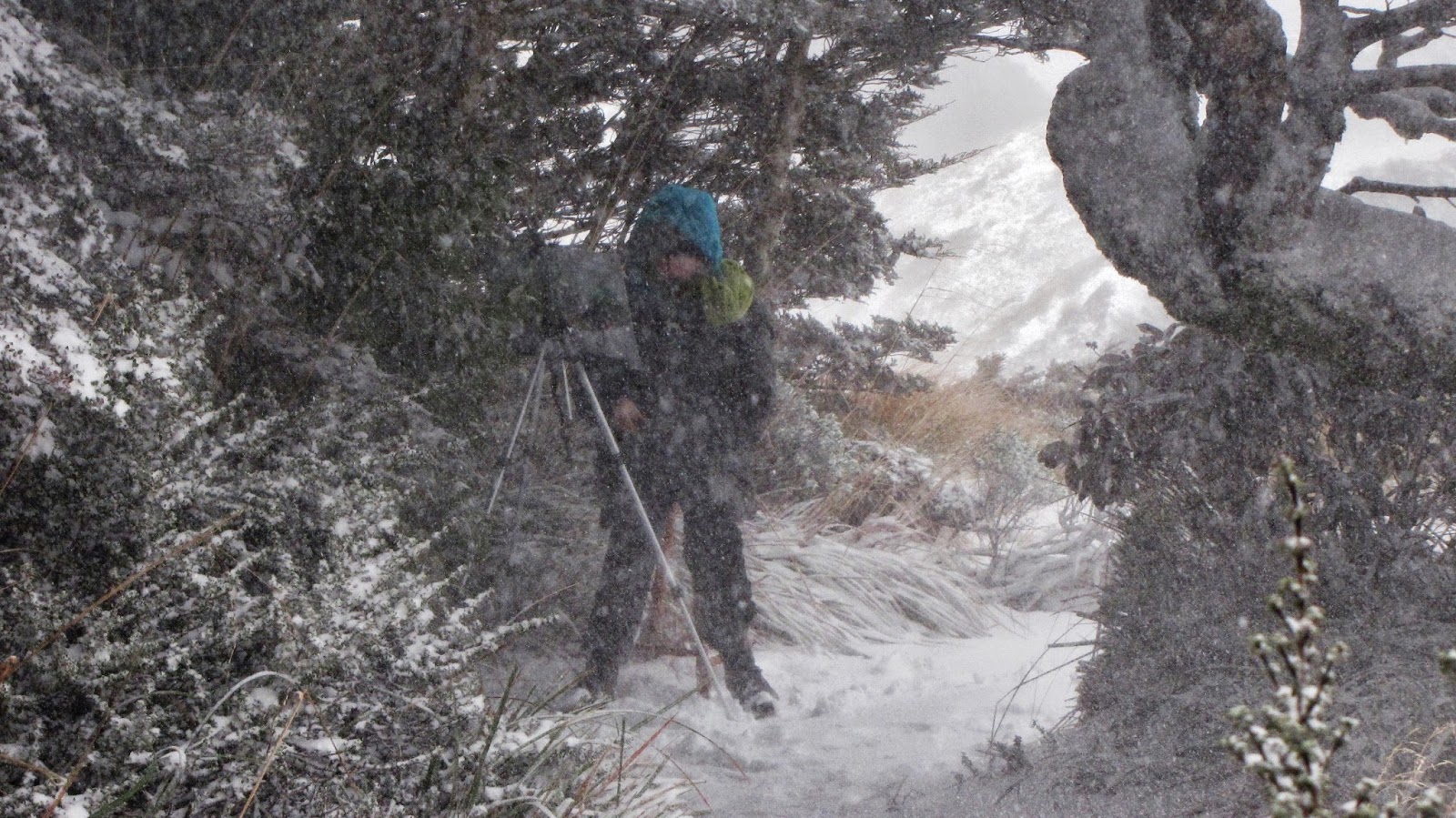 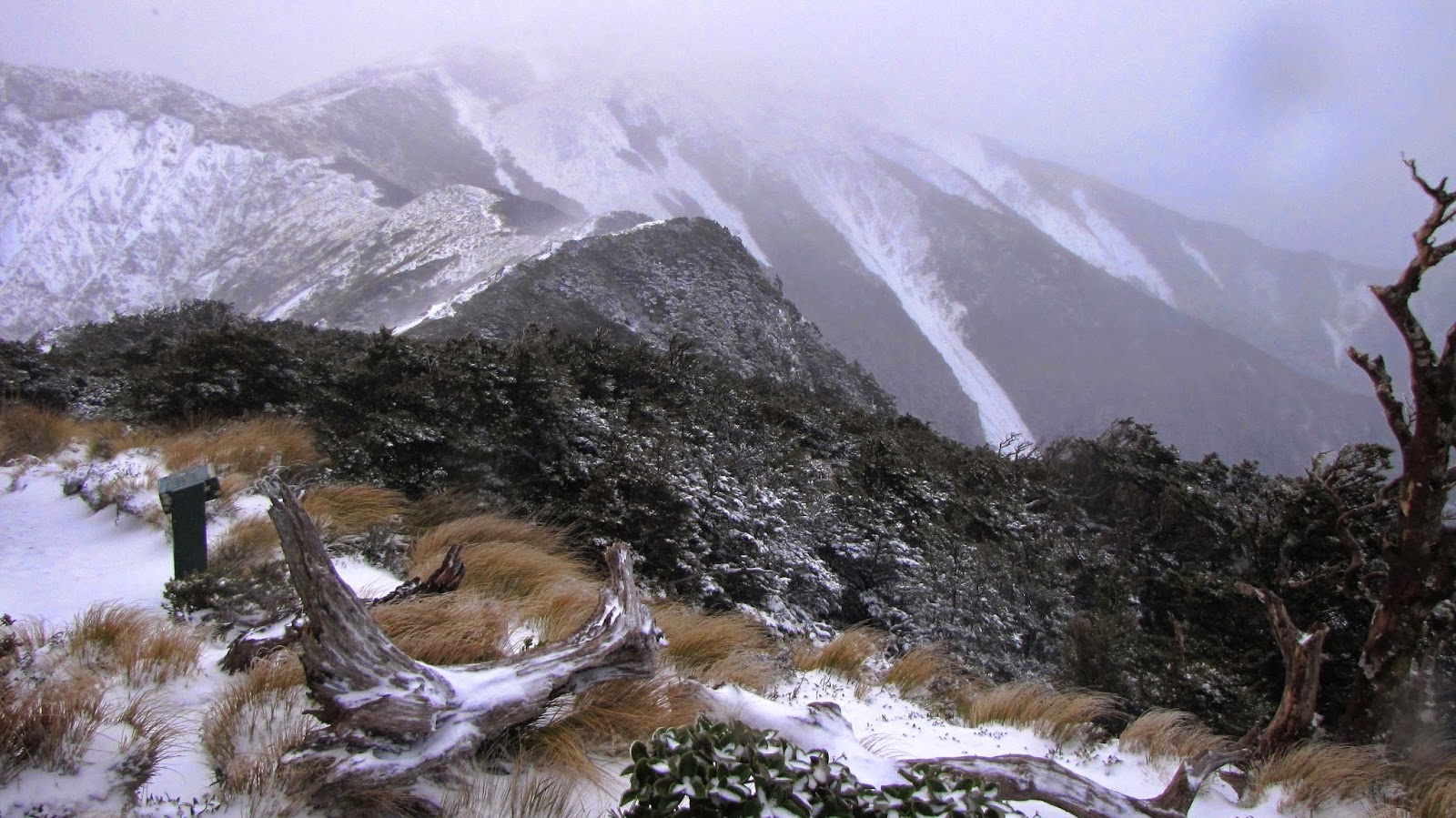 I managed to draw the hut from the shelter of the low trees which protected me from most of the wind. But the snow still fell all over me until I became as white as a snowman. Fortunately the snow didn't affect my drawing too much. I used charcoal and the snow falling on it I just brushed away, it was quite dry while still frozen. It did get a bit damp once I brought it inside the warm hut. 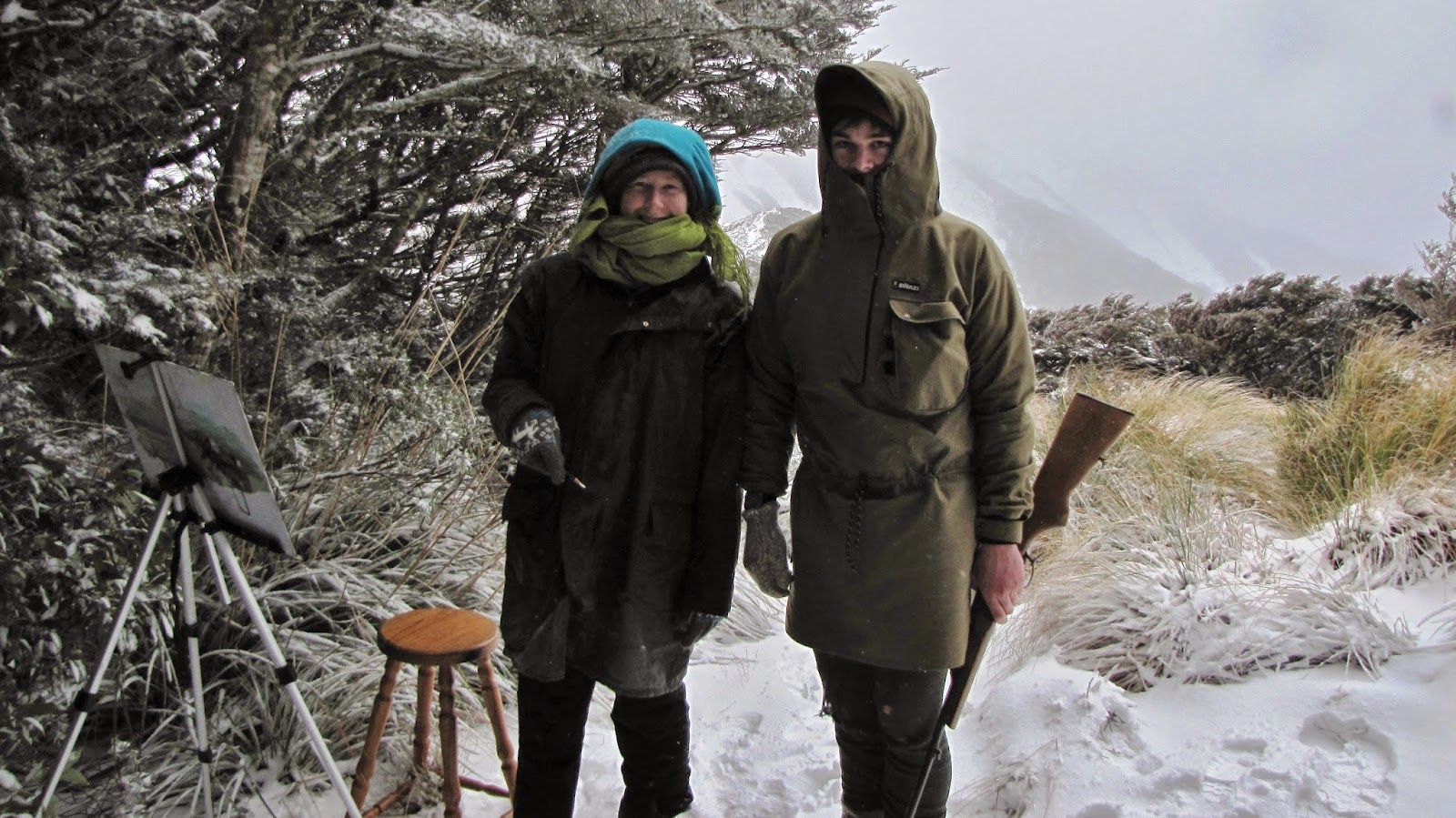 Caleb and I look hilarious in this photo. I had just about all my clothes on and some borrowed from Caleb. I stayed warm enough. Caleb did a bit of hunting but we moved around a bit much for that to be very successful and he only got a possum for our dinner. 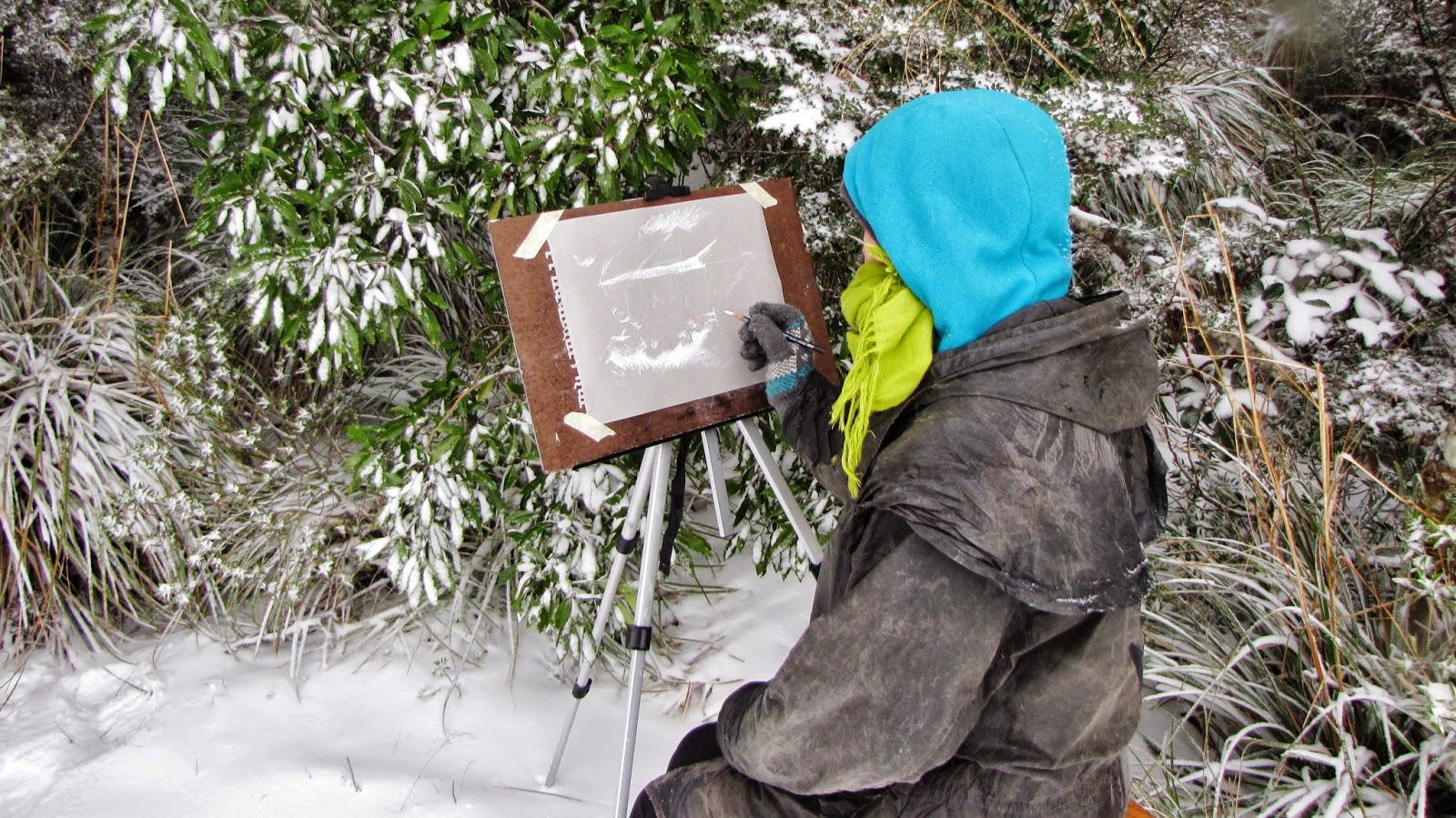 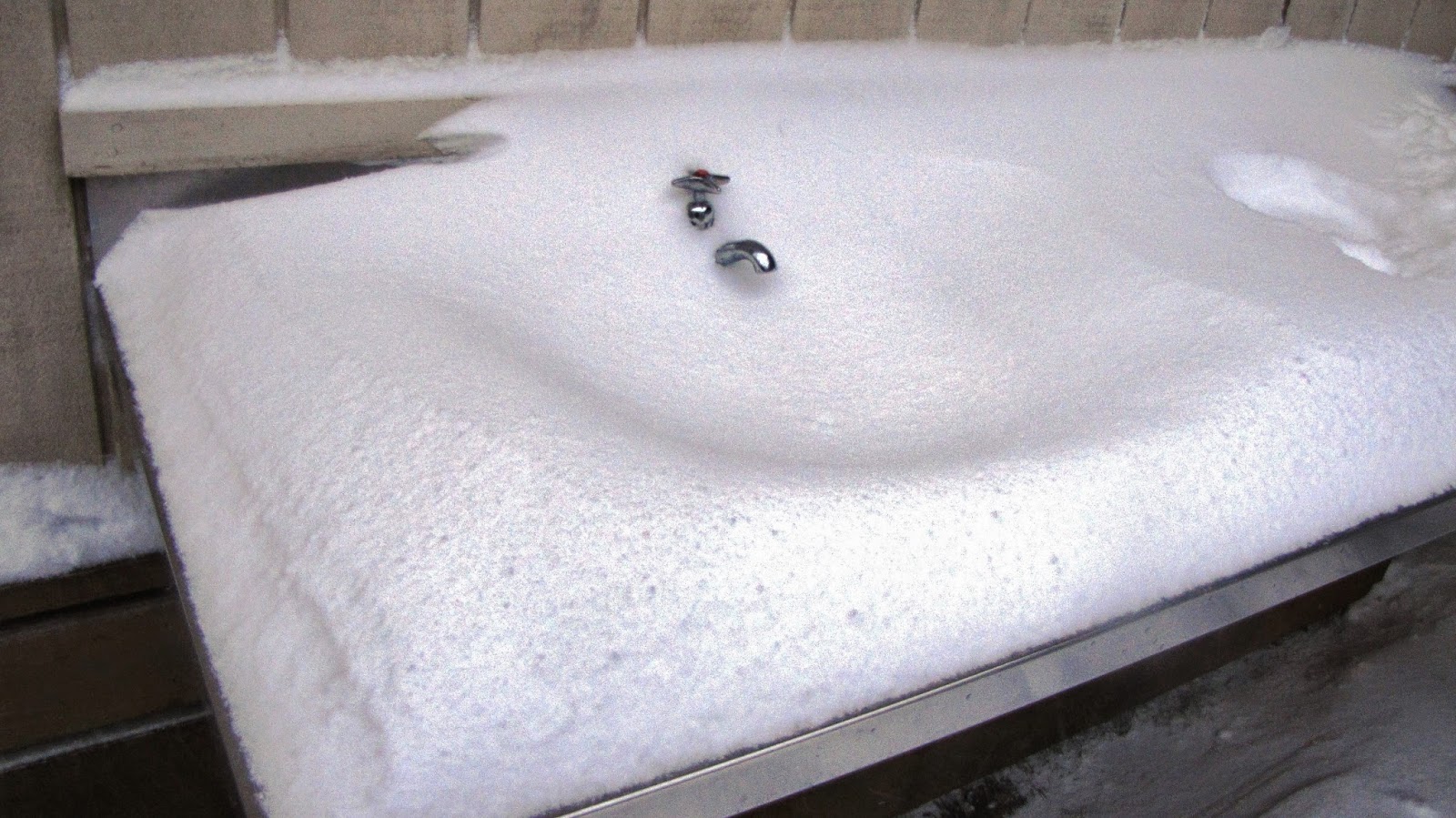 Lots and lots of snow! Heaps of fun and excitement! 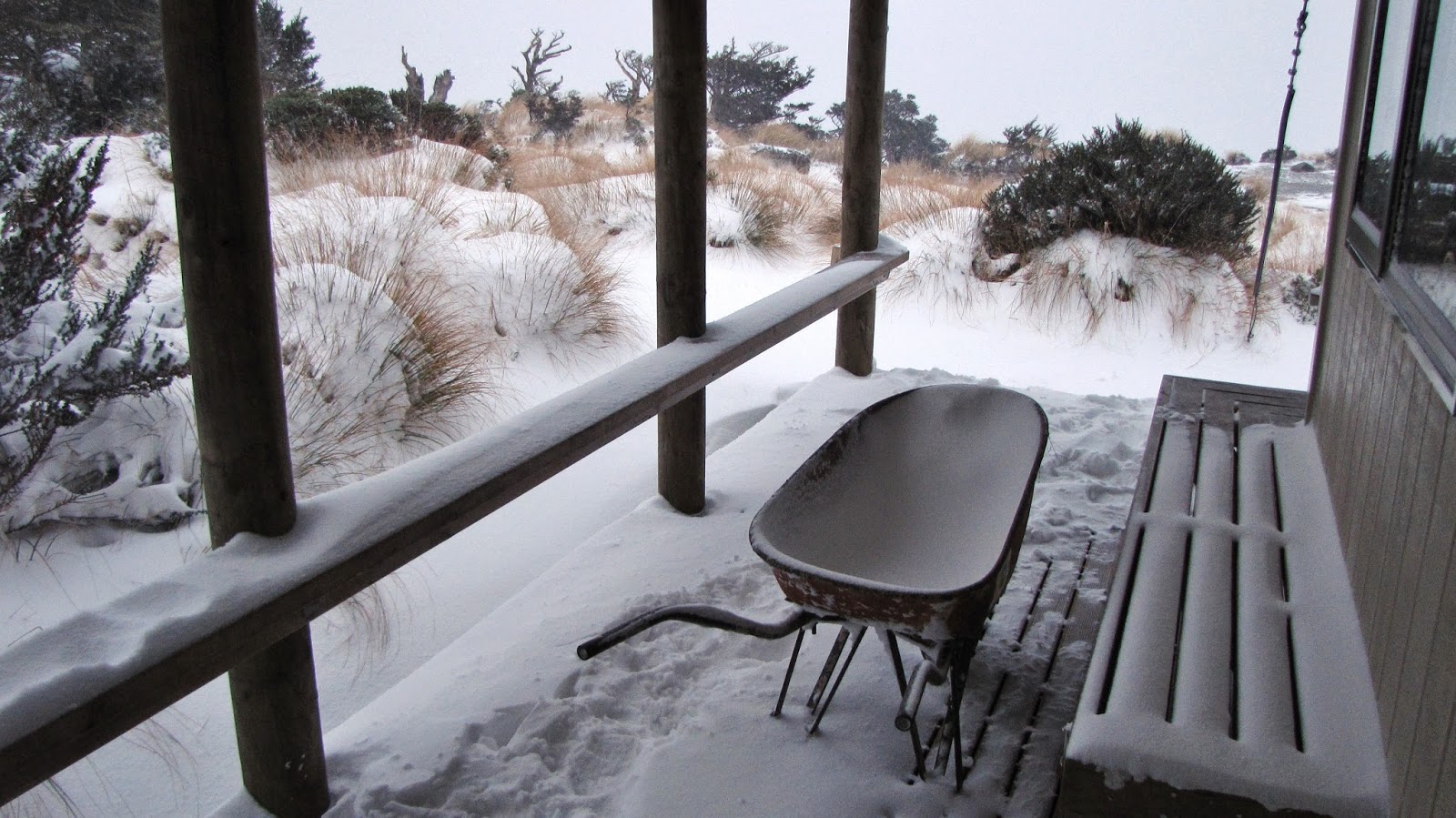 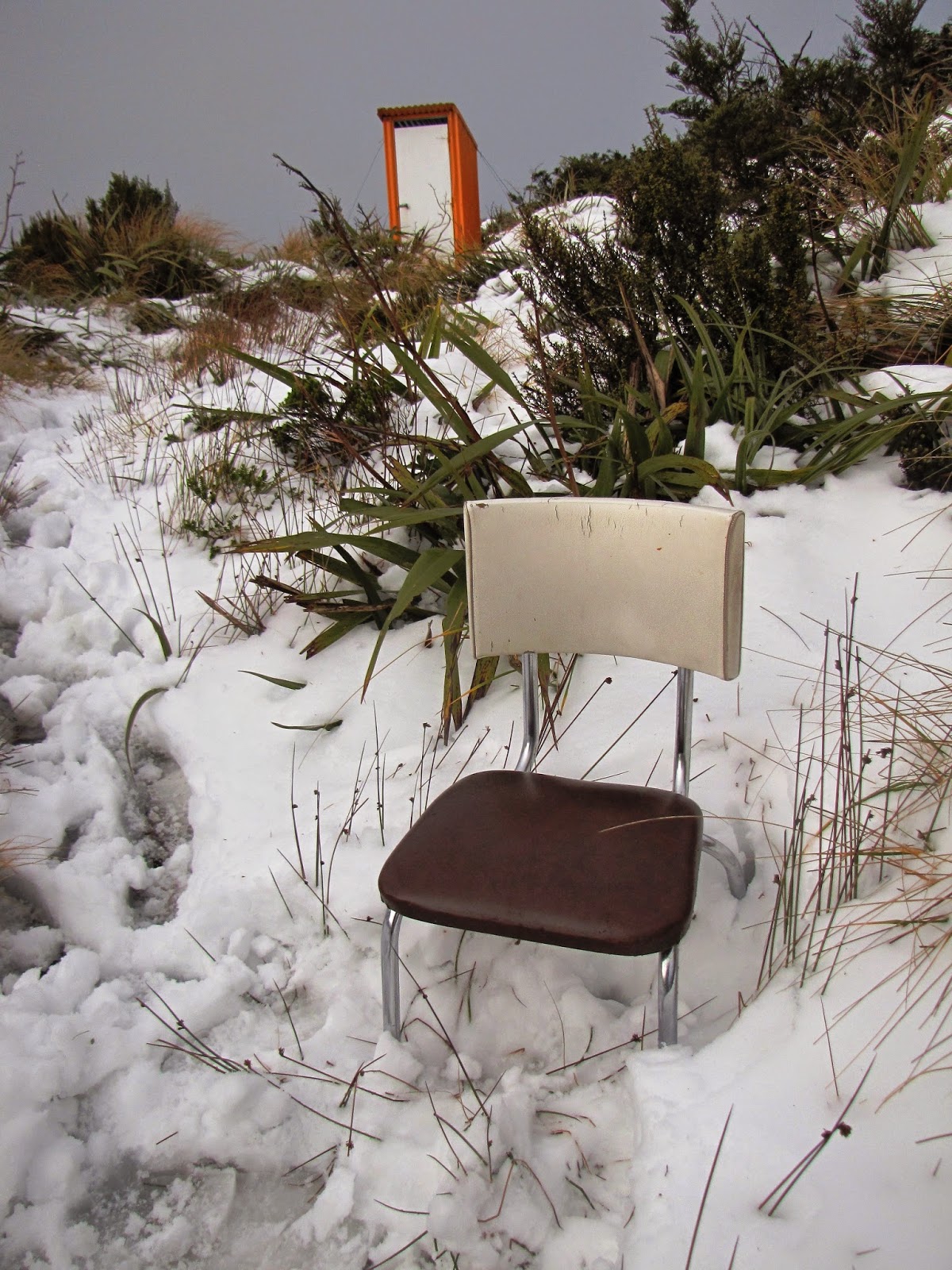 The last hut we stayed at was Howlets Hut. (Via Daphne hut which I also drew) My favorite hut of the trip. It is one of the highest huts in the North Island and is not a DOC hut but owned by the Heretaunga Tramping Club. We got there on a wild evening, almost got blown off the ridge at the top but managed to stumble into the little sheltered hollow where sits the hut looking beautiful. One can only really appreciate the beauty of a hut when one has tramped for hours for the sight of it! During the night it began to rain and the snow to melt. We were conscious of having to walk down the Tukituki river on our way out and were not sure how quickly it was rising, so we walked out early and I only had an hour to sketch the hut. The river was higher and stronger going out, and the snow had melted very quickly and was running down the path making it slippery very. 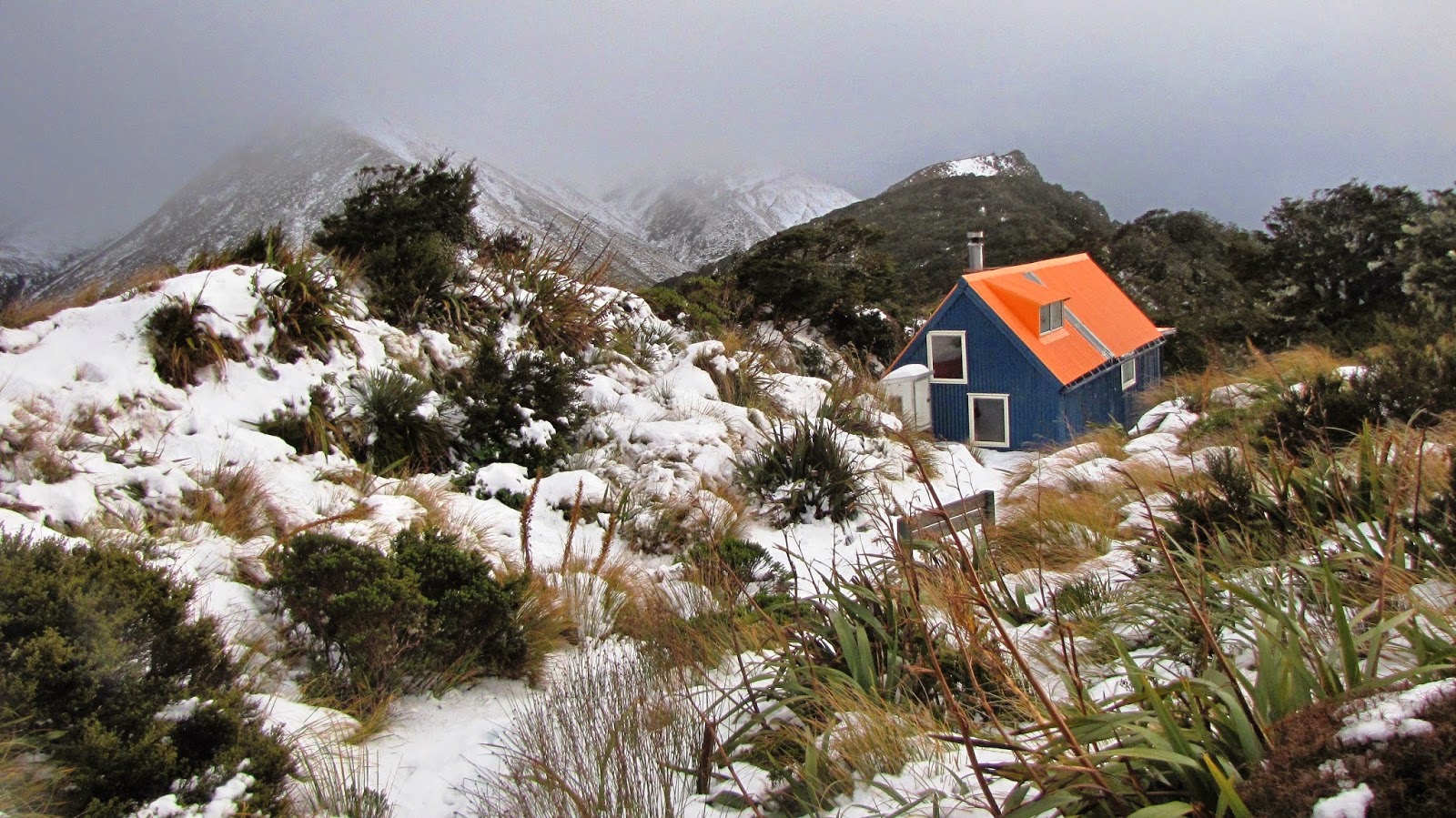 This is just a quick word about our trip. I have been very busy lately trying to get in eight hours of drawing and painting each day as well everything else...

Next hut trip is planned for sometime in September and will be down south somewhere. Probably the Terrible Tararuas which I am excited to become acquainted with.